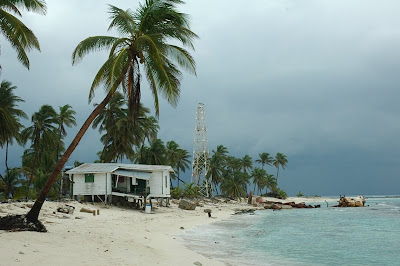 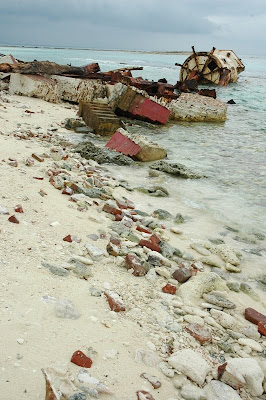 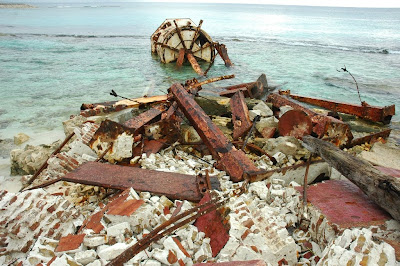 Belize City, Belize, October 1, 2010 – The historic lighthouse at Half Moon Caye has finally given way to the forces of nature, as a result of Tropical Storm Matthew. The Half Moon Caye staff was evacuated from the island in the threat of the storm, so all we know is that it was some time during the weather-event that the structure fell. The discovery was made by staff upon their return to the island on Monday and a complete assessment was conducted on a trip to the island shortly thereafter. The active lighthouse was unaffected and continues to function properly.

The structure, built in 1820, now lies as disintegrated pieces of metal partly in the water at the edge of the island. The lighthouse was upgraded in 1845 and the steel frame added in 1930. Originally located midway between the north and southside of the caye, the lighthouse in recent years had been gradually moving closer to the water as weather phenomena changed the dynamics of the caye, shifting it northward. The old lighthouse was decommissioned in 1997 and since then has been gradually decaying. Efforts were being made to preserve the cultural landmark, but it did not gather enough steam to generate the needed funding. In 1998, a new lighthouse was erected several metres away from the old structure.

Belize Audubon Society is currently seeking funding to erect a multi-function building visually replicating the iconic architectural design of the old lighthouse. This new structure will not only honor the old lighthouse but will also function as a visitor centre, communications center, and patrol and observation deck.