Fire Officials in San Pedro Town are investigating the circumstances surrounding a fire that occurred late in the night of Tuesday December 20th. The fire partially destroyed the thatch roof of Robin’s Kitchen situated at the western end of Coconut Drive opposite Royal Palms Resort. 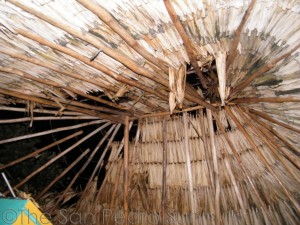 According to Luis Romero, he another person was driving nearby sometime before 11PM when they saw flames coming from the on top of the roof. They quickly requested the assistance of establishments in the area and managed to get two hoses and began fighting the fire until the fire officials were notified.

Fire officials responded shortly after and fortunately, the fire was brought under control salvaging part of the structure and the contents inside. Robin’s Kitchen is owned by John Harvey (aka Robin). Both the San Pedro Police and Fire Departments are investigating the possible cause of the fire. The total cost of damages is yet to be established.