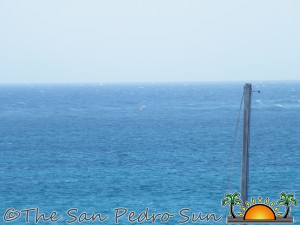 A vessel with two tourists sank at sea on Friday August 31st near San Pedro Town off Ambergris Caye. The “Baby Jazly” is owned by 39 year old Sherman Michael Cain of a San Pedro Town address. Luckily the tourists and the captain have been rescued and are recovered from their scare.

According to San Pedro Police, shortly after 1:30PM the 25 foot vessel capsized after a big wave hit, and sank in the area of Tuffy Channel located some ¼ miles east of San Pedro Town. On board the vessel were 54 year old Nancy Kluve and 48 year old Allen Gibson, both of Orange County California, USA. Police said that the tourists as well as the captain escaped unhurt and tourists were recovered from a scare. The San Pedro Sun confirmed with police that Cain, who is a self employed Belizean Tour Operator, did not possess a valid Tour Operator’s License.

The Americans told police that they were returning from the Esmeralda dive site to their hotel and upon reaching near the Tuffy Channel Area, they capsized and sank. Police are still investigating what caused the vessel to capsize, and they have confirmed that Cain will be charged by the relevant authorities.