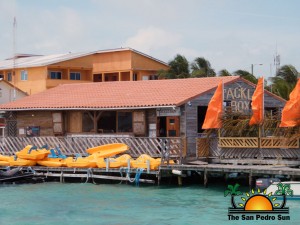 About 45 party-goers were scared and sustained minor injuries after a portion of the flooring of an over-the-water deck they were on collapsed into shallow water over the weekend. The incident occurred at the Tackle Box Bar and Grill in San Pedro Town sometime around 1:30AM on Easter Sunday.

According to police reports, the outer deck of the establishment gave in and fell into the sea along with some 45 patrons. San Pedro police are reporting that as many as 500 people were inside the establishment socializing as part of the Easter activities on the island. It appears that due to the weight of the crowd, a large portion of the wooden floor collapsed into the sea which was about four feet in depth. The incident caused quite a scare to the party-goers and local authorities on the island were forced to close the establishment for the night.

San Pedro police indicated that a number of people have complained of varying degrees of injuries as well as lost or damaged valuable items such as cell phones, cameras, jewelry and even cash. According to police, while there was no loss of life, the incident highlights the need to have over-the-water establishments on the island inspected annually by certified engineers. It also highlights the need to require such establishments to periodically make renovations to avoid similar incidents, commented the Officer in Charge of the San Pedro Police Department, Superintendent of Police Luis Castellanos.