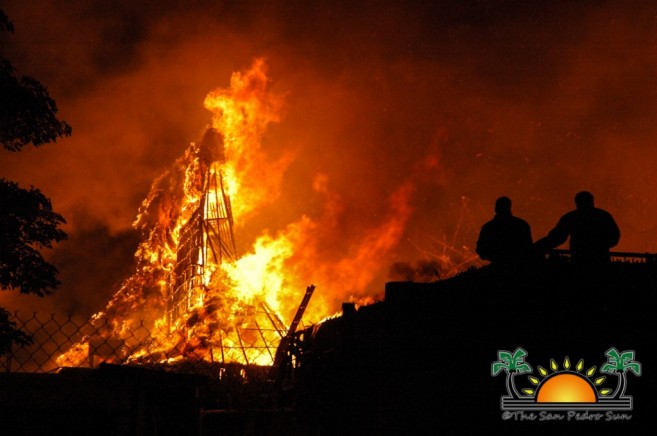 Ramon’s Village Resort, an iconic tourism institution on Ambergris Caye, located on Coconut Drive, has suffered major damages after a fire ravaged through its grounds. The fire started shortly around 8PM on Tuesday night, August 27th when a building in the southern section of the resort caught fire. It took almost 2 ½ hours before the fire was brought under control, at which time about 2/3 of the resort was completely destroyed. Neighboring structures received damage and electricity to the entire island was interrupted for nearly an hour.

The San Pedro Fire Department responded shortly after receiving the call of the fire, but faced several challenges. A section of Coconut Drive, including access to Ramon’s Village is currently undergoing major street rehabilitation, and this caused limited access to the fire. Adding to the extenuating circumstances was low water pressure from the fire hydrants after electricity was cut off at 8:30PM. A message from Belize Electricity Limited sent out at 9PM indicated that an emergency power interruption was necessary “to mitigate damages from [the fire] within close proximity to [the] transmission line.”

Guests from the resort were evacuated by the management of the resort before the fire got out of control. “It is definitely a loss to our local tourism industry,” commented the Minister of Tourism and Area Representative Manuel Heredia Jr. as he observed from a distance the island’s prime resort going up in a blaze. “We will render as much support to the management and staff because this resort has been a leading institution in tourism, not only on the island but in the country,” added Heredia.

A large crowd gathered at all corners as the resort was gutted by the blazing fire. Local residents formed a bucket brigade to assist the local firefighters to bring the fire under control. Residents living around the resort as well as guests from neighboring resorts were evacuated as a precautionary measure.

Up to news time, the estimated loss is unknown as the investigation is yet in its early stage. Last year, the resort completed major renovations, an investment that was estimated to have cost millions.

Deon McCaulay drafted to play in the Superleague Greece2 Photos

The Harmonious voices of the San Pedro choir4 Photos