On Sunday, November 29th shocking news came from the Princess Royal Youth Hostel located on Mile 21 of the George Price Highway, with word of a fire breaking out and killing three teenage girls. Reports are that the fire started shortly after 2:30PM, when facilitators observed one of the buildings engulfed in flames. Matters became worse when it was noted that the building on fire was where 16-year-old Ana Melinda Carlos, 16-year-old Shadisha Arnold and 14-year-old Elizabeth Mckoy were being kept in solitary confinement as punishment. Even though efforts were made to stop the fire and rescue the teens, all failed, resulting in the death of the girls.

According to initial reports, Carlos, Arnold and Mckoy had escaped the hostel a day before along with another 12-year-old girl. After the escapees were returned to the hostel by Hattieville police, they were confined to their dorm rooms for 24-hours as punishment. The three older girls were put in a separate room from the younger one. “Upon their return, they were confined to one of three rooms in the building being used to house the female residents at the Youth Hostel. This meant that because they had recently run away, they would be kept in their rooms for a 24 hour period and would lose certain privileges. “Three of the girls that went AWOL the day before were presumably planning another escape. The plan was to start the fire in order to create a distraction. This would prompt the officer to open the door and let them out and they would run away while the officers were occupied trying to out the fire,” said Starla Bradley, Director Community Rehabilitation Department. 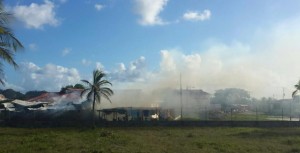 On that tragic day, there were only two female wardens supervising the 30 girls currently residing at the hostel. One of the wardens was out with the girls who were not punished, conducting recreational activities. The other warden was in the dormitories, the same building that burned down. The structure that burned was a wooden building containing four small rooms and a common area. “Shortly after 2PM, one of the three girls who was confined in the room called out to the officer and said that another girl in the room had lit a pillow and there was a fire. Now we are not certain how quickly the girls called for help. But from the various accounts we received, the fire was already in a huge blaze on the top bunk when the officer went to the room to check on the girls. This was confirmed by some of the female residents who were in the building along with the officer at the time. The officer then proceeded to try to open the padlock which was on the door. But had difficulty opening the lock. The girls inside started to panic and in an effort to try to out the fire, they threw a blanket on top of the flame and this fed the fire. All accounts are that the fire spread very quickly and since the room is small, the smoke soon engulfed the entire room, making it difficult for them to see. The second officer was called from the basketball court and she came in and took the keys from the other officer and also attempted to open the door. She stated that she could not because the smoke was too heavy and sent for a flashlight,” explained Bradley.” Meanwhile the staff and the male residents used buckets and fire extinguishers that they had on hand to try to calm the blaze. Some persons attempted to break through the wooden wall at the back of the building. By the time they had broken through, the fire had already engulfed the building and the children could not be saved.” The fire department did not arrive to the scene until 3PM, when the girls were already believed to have died.
The grieving families of the girls are still in disbelief over the incident, and wondering how such a tragedy could unfold. “I want to know why they couldn’t open the door to get the children out of the building. Because they called us and told us about the fire,” says mother of Shadisha Arnold, Audrey Arnold. “I want to know why they locked her up and they didn’t have anyone to watch over them. They should have had somebody to watch them if they locked them up – some guard or someone to be there to see what they were doing. I really don’t know how I will continue on with the loss of my daughter. I love my daughter. They took her away from me. They sent her there and I couldn’t do anything,” said the mother of Ana Carlos, Patricia Trujillo. Both Arnold and Carlos had been placed at the hostel under a court order. “My little angel, she was smart, sweet and beautiful. So I don’t know why I turned to Human Services. Now she is gone,” said the mother of Elizabeth Mckoy, Victoria Mckoy-Claunch who had voluntarily put her daughters care into Human Service Department. According to Mckoy-Claunch, her daughter had only been at the hostel for two weeks. 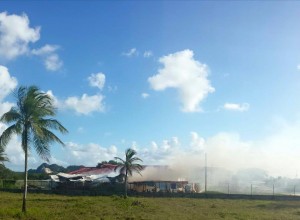 Many are questioning why the room was locked if they claim that there was a warden in the room. “We are trying to ascertain why the room was actually locked because it’s actually against institutional policy to lock the children in for these same safety issues. It’s against protocol. We are still trying to sort through what exactly happened. Was it a case of the lock being faulty, was it a case of not being able to locate the key, was it that nerves and the issue of the smoke played into difficulties opening – we have so many questions that we’re still trying to figure out at this time. We know that we have worked hard to develop protocols, we have done a lot of training with staff – and so the question is you know, why we still have locks, locked, padlock locks on the door and so it certainly does raise a lot of questions that we need to figure out quickly,” said Bradley.
Reports indicate that the fire was started with a lighter that was allegedly smuggled in by one of the girls. “They should never have that type of equipment. They should have been searched upon entering – thoroughly searched by a female officer and along the lines there are some things that did not follow procedure and that is what we are trying to ascertain – where along the lines, who should have done what and where that fell through,” said Bradley.
The Ministry of Human Development, in charge of the operation of the hostel, has since launched a full investigation into the fire. As a result three staff members have been placed on administrative leave pending the outcome of the investigation. “What we fully intend to do is a full investigation of this matter, because what we need to be able to deal with this matter is the clear unvarnished truth about what happened. We cannot dwell on conjecture or hearsay. We need to really find out what has happened in the cold sober light of day,” said Judith Alpuche, Chief Executive Officer of the Ministry of Human Development, Social Transformation and Poverty Alleviation. Executive Director of the National Committee for Families and Children, Margaret Nicholas with assistance from United Nations Children’s Fund (UNICEF) will be carrying out the investigations.