The Rickilee Response and Rescue Team (Triple R) continues to respond to emergency calls on Ambergris Caye, assisting accident victims throughout the island. The most recent cases involved a near drowning and two traffic accidents. The most severe of these accidents include a young tourist, who suffered massive head injuries and was eventually airlifted to the USA.
On Sunday, May 5th, the team from Triple R was called to the Secret Beach area, where on arrival, they observed 46-year-old Belizean construction Lisandro Gonzalez face down in the water. Triple R’s auxiliary Philip ‘Billy’ Leslie responded swiftly and transported the victim to the Dr. Otto Rodriguez San Pedro Polyclinic II for treatment. Gonzalez’s condition was deemed critical, and Triple R began planning to transport him to Belize City for further medical assistance. While arranging his transport, the team received a second call about a traffic accident north of San Pedro Town. 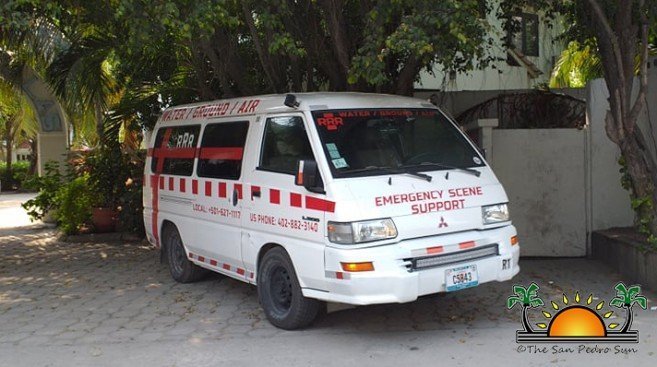 Leslie rushed to the scene and observed 18-year-old American National Austin Lientz badly injured and presenting with a concussion and possible loss of consciousness. Reports are Lientz fell from a moving golf cart, causing severe head injuries. He was taken to the Polyclinic and along with Gonzalez, airlifted to Belize City, then transferred to the Karl Heusner Memorial Hospital by the Belize Emergency Response Team. Lientz was transferred to a private medical center where his condition was deemed critical with internal cranial pressure. With lifesaving action, he was induced into a medical coma, placed on a ventilator and on Monday, May 6th he underwent two surgeries that lasted a total of four hours. After this surgical intervention, the Triple R team coordinated flight crews from the United States and Tuesday, May 7th Lientz was transported to the Brower County Hospital in Florida, USA. According to Lientz family, he has was brought out of the induced coma, and the ventilator was removed. He is aware of his surroundings and starting to answer questions appropriately.
Meanwhile, Gonzalez is on the road to recovery. His family is now appealing to the public for assistance. Anyone able to help can call 660-0468 or 668-5048.
A third accident was registered on Tuesday, May 7th, involving a female tourist after she fell from a golf cart. She sustained head injuries and was transported to Ambergris Caye Hopes Clinic. She was treated and is on her way to recovery.
Triple R is a young non-profit, Quick Response Team that assists both island residents and visitors alike in emergencies. The group was formed in memory of American National Rickilee Mercer, who perished on the leeward coast of Ambergris Caye in March 2017. She went missing after heading out for a jet-ski adventure. She was found dead on March 1, 2017. Since the creation of Triple R, the emergency response team has become the main point of contact for road and water accidents. Triple R utilizes 15 plus volunteers and staff to complete this beach to bedside transfer with thanks to the Belizean team, Vanesa Parham, Billy Leslie, and Chris Alpuche. The organization is always looking for volunteers, donations, and help in growing within the community. Donations can be made with a credit card or PayPal via their website on www.rrr.lfe or contact Jodie Harnish at Palapa Bar & Grill.
For any emergencies, Triple R can be reached any time by calling 627-1117.