Home » Accidents & Disasters » Environment » Update on the situation with wildfires, what is being done and the prospects for improvement

Belmopan Area: Sunday April 26th, two wildfires in the area of north east Belmopan were successfully controlled by the Forest Department along with help from the Belmopan City Council and Westar Services. The crew remained dedicated to the task well into the night to ensure the fires would not reignite. The smoke from these fires has now subsided and this morning in north Belmopan, the conditions are much improved. Throughout the course of today, the situation will be monitored closely to ensure there are no flare ups. The dedicated officers of the Forest Department, Fire Department, Mayor and staff of the Belmopan City, as well as workers of Westar Services are to be commended for their effort and service to their community. The crew will now move to address other escaped fires in the south area of Belmopan. Fortunately, the weather conditions have improved and daytime temperatures are now in the mid 90s as opposed to 107 degrees Fahrenheit experienced last week.

Vaca Forest Reserve: Sunday April 26th, a large wildfire in the Vaca Forest Reserve with multiple fronts was brought under control by the Forest Department wildland fire crew from the Mountain Pineridge Forest Reserve. This fire was burning on multiple fronts – east, south and west, and was responsible for much of the smoke pouring over Benque Viejo, San Ignacio and Santa Elena. The most aggressive fire on the eastern flank was brought under control by yesterday evening. As a result of this, the conditions in the San Ignacio, Benque and Santa Elena have vastly improved, and there is less smoke in the air. The dedicated officers of the Forest Department are to be commended for their effort and service to their community. The Forest Department fire crew will continue to fight the fires on the southern and western flanks in order to prevent further spread into the Chiquibul National Park.

Other parts of the country: There are wildfires in other parts of the country including around the St. Herman’s Cave, Springfield, and Bladen Nature Reserve, and through the help of partners from the Belize Audubon Society, Y’axche Conservation Trust and Toledo Institute for Development and Environment, these fires are being fought with the dedicated efforts of their staff. These organizations and other business community members are to be commended for their effort and service to their community. 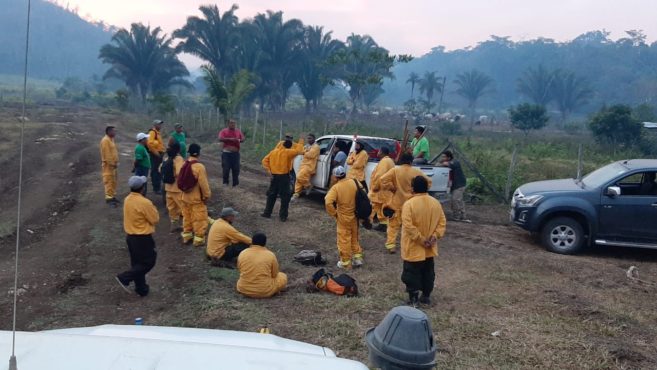 1. The State of Emergency declared on April 1st and enhanced on April 11th limited the movement of non-essential personnel, which included Forestry Department and the Department of the Environment. Never-the-less, the situation with agricultural burnings was monitored remotely by satellite due to the health risks posed by smoke.
2. Around April 11th, the situation with agricultural fires intensified, and new legislation was crafted to address the matter. With the approval of the Ministry of National Security, the Forest Department and Department of Environment were activated to engage in field reconnaissance to put a handle on the matter and to engage in an aggressive awareness campaign.
3. On April 21st, the new legislation came into effect, and the Department of Environment and Forest Department continued their awareness campaign and began enforcement of the new law. A 77% reduction in agricultural fires was recorded shortly thereafter.
4. Despite the reduction in new agricultural fires, with daytime temperatures soaring to 107 degrees Fahrenheit, by April 24th, the smoldering fires from agricultural lands escaped into wildfires, which began burning in bushes and shrubs. In the Vaca Forest Reserve the escaped agricultural fires began burning into the Vaca Forest.
5. Forest Department fire crews were immediately mobilized and quickly responded to these wildfires which threatened Belmopan and Benque Viejo, San Ignacio and Santa Elena, which were the communities most affected by smoke.
6. By the night of April 26th, many of the wildfires were under control and smoky conditions have now improved. However, the fire crews remain in the field mopping up remaining areas.
7. Definitions:
a. Agricultural fire – a fire occurring solely on an agricultural plot, lit by a farmer to clear newly chopped land, to pre-burn before harvesting a crop, or to burn fodder leftover after harvest.
b. Wildfire (wildland fire, bushfire, forest fire) – a fire occurring on land covered in wild vegetation or forest, lit either by humans, or by an escaped agricultural fire, or by natural occurrence such as lightning. 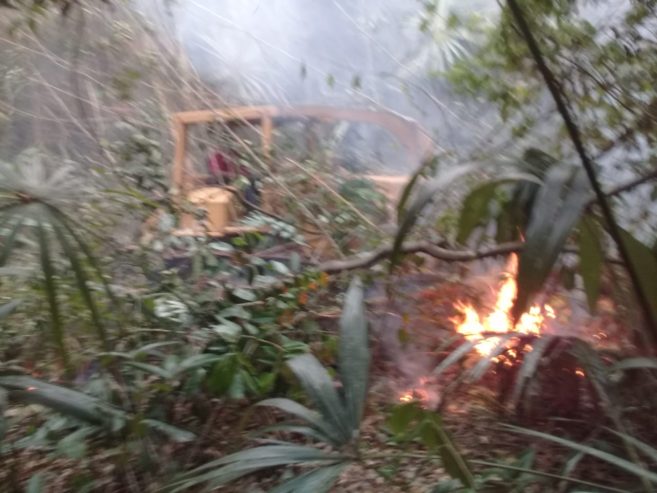 Forest Department bulldozer clearing a fire pass ahead of an active fire front in the Vaca Forest Reserve on April 26th, 2020.

The regional situation: For the public to have a greater understanding of the challenge posed by changing weather patterns and an increased demand for farmland, faced by countries like Belize, the below regional context is highlighted:

1. Regionally the situation is worse than our own. In Nicaragua, Honduras, Guatemala and Mexico the situation is ten times worse than in Belize. As a result of this regional situation, smoke from fires all the way down in Nicaragua and Honduras are affecting Belize, causing smoky conditions even in the outer Cayes. See below table and maps.

Satellite view of the region on April 20th, 2020. In the image below, smoke appears as grayish, whispy cloud-like features. Smoke from fires in Honduras can be seen heading towards the outer cayes.

MV “PARANGA” runs aground off the coast of Belize