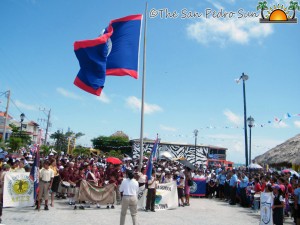 September 10th is a day of much significance to Belizeans locally and around the world. It commemorates a pinnacle moment in our history when settlers were faced with a decision that shaped our future as a country as well as a people. This year marked the 214th anniversary of the Battle of St. George’s Caye and across the country activities were held in celebration.
In San Pedro, the day celebrations commenced with the coronation of the new Miss San Pedro 2012-2013, Miss Naiely Puc. Thousands of students and guardians, along with teachers and principals of the 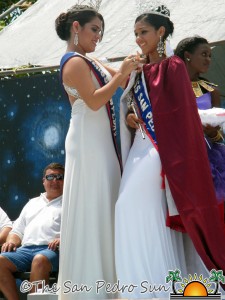 various schools on the island converged at the Central Park as early as 8AM for a program scheduled to commence at 9AM.
Around 11AM, the contestants were introduced to the stage for the official ceremonies. Following the national anthem, the national prayer and a speech by Mayor Danny Guerrero it was time for the Coronation. On stage were outgoing Miss San Pedro, Miss Yakarelis Hernandez, all contestants for the 2012 Miss San Pedro competition; Naiely Puc, Darcie Zepeda, Ashley Rhaburn and Adriana Haylock, councilors and Mayor of the San Pedro Town Council.
Passing over the crown, sash, scepter and robe, Miss Yakarelis Hernandez offered thanks for the opportunity to have been San Pedro’s Beauty Ambassador. Miss 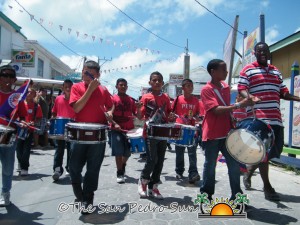 San Pedro 2012-2013 Naiely Puc accepted her new title and assured that she will represent the community to the best of her abilities while being a role model for every young lady on the island.
Following the coronation, Yakarelis and Naiely were joined by the other three contestants on the Queen’s float to lead the parade around the main streets of town. September 10th celebrations continued throughout the day with an all day beach bash at the Central Park where residents indulged in a variety of fun filled activities, including the ever popular greasy pole along with other land and sea activities.