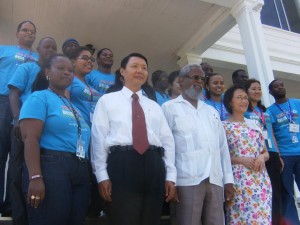 Belize City, Tuesday, October 30, 2012 – It was gratifying for the members of the Pantempers Steel Orchestra, the nation’s premier steel band, to be welcomed home by no less a personage than the nation’s Head of State, His Excellency the Governor General Sir Colville Young, Sr., and the Republic of China on Taiwan ambassador to Belize, His Excellency David C.K. Wu.

Following disembarkation at the airport, they had boarded a bus and had been brought straight to their welcome reception at the Chateau Caribbean Hotel, some considering it an inconvenience since they were a day late in returning, having been forced to overnight in Los Angeles, CA after missing their connecting flight due to a luggage snafu.
They had been Belize’s representatives to the 2012 Latin American and Caribbean Cultural Exhibition in Taiwan, a two-week, five-gig trip to the other side of the world. They had left the nation and the hemisphere on October 17th, and a few could be excused for thinking that today was already tomorrow.

Indeed several members of the group had been forced to rush from the airport to their jobs but for those in attendance, spirits were high despite the jet-lag.

In his brief but informative address the Governor General explained not only the etymology of the word “Carnival”, as well as the reason for this now regional celebration, and the origination of steel bands in Trinidad but also how the Pantempers came into being almost 20 years ago.

Doctor Young mentioned that he and Doctor Lennox Pike, on their return from their studies in Jamaica in the 1960’s, were the founders of the All Star Steel Band. By 1992 the band was under the direction of the University College of Belize, and its musicians, chafing at the economic restrictions and repertoire, broke away from the institution and formed the Pantempers Steel Orchestra. The rest, as they say, is history. 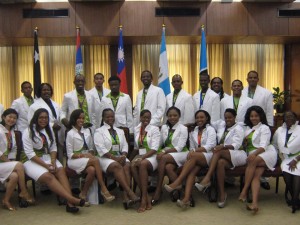 With not a trace of irony or immodesty, the Governor General lauded the troupe as “one of the best bands in the world” and welcomed them home as “good ambassadors for Belize” who had made him very, very proud. Indeed high praise from a man who has met more ambassadors than perhaps any other living person in the country, and who is recognized as a language, music and history expert.

Ambassador Wu had earlier acknowledged that the group’s performances in Taiwan had been something to write home about, having followed the reports in the media there.

They had wooed their audiences not only with their renditions of American pop songs, but had introduced them to traditional Belizean folk music arrangements and punta rock, even teaching some to attempt their own version of the dance. But the highlight was their surprise rendition of a 40 year old popular Taiwanese standard “The Moon Represents My Heart” which sparked impromptu vocal accompaniments. The musical arrangement of this song was done by Belizean musical wunderkind Herschel Armstrong, a 12-year member of the band.

Band leader Therese Martinez, herself a 20 year Pantempers “foundation” player, told the media and guests that while the performances to sold out audiences were tremendously gratifying, the tour that included visits to museums, manufacturing facilities, amusement parks, a Buddhism center, and Taipei 101, the second tallest building in the world, was also educational as well as enjoyable.

After “Tai-One” she joked half-seriously, they were sure “Tai-Two” would be great. She was hopeful that they would get to do it again. The tour was as a result of an offer of assistance to the Governor General’s music in schools project by Taiwanese Vice President Wu Den-yih during his visit to Belize and the region in August of this year. Dance and music groups from St. Kitts (folk dance), St. Lucia (traditional folk music) and Guatemala (Marimba) were also represented.