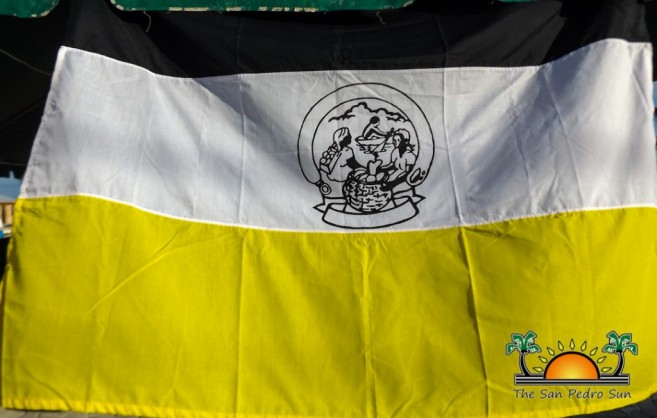 Residents enjoyed a ‘Food Expo’ at the Central Park on November 12th. From 12PM to 3PM, council members sold their traditional foods and desserts to the public. Delicious hudut, fish sere, boil up, and even sweet potato pudding was available for the purchase, all while the unique sounds of Garifuna music.

The fashion show was divided into four segments, and Ras Jahta presented his “Jahta Extreme” fashion line first. Models walked the runway in both traditional Garifuna attire, and African-inspired pieces. To the crowds delight, the segment ended with Ramsey showcasing his duo outfit inspired by the continent of Africa.

For musical entertainment, the council performed live drumming with maracas and turtle shells. The Garinagu have several varieties of dance, and two forms were displayed by the San Pedro Dance Academy during intermissions.

The last three clothing segments of the fashion show represented the three colors of the Garifuna flag: yellow, black, and white. Eduardo Aguilar, organizer of the fashion show, stated that he thought it was a great idea to incorporate the colors of the Garifuna flag into the fashion show. Although each color has various meanings, in this case, the black representing the hardship and struggle, yellow signifying hope and prosperity, and white indicating peace. Models showcased crisp white outfits first followed by sunny yellow outfits. Lastly, models sashayed in stunning black outfits that had the crowd cheering widely. All outfits can be purchased at Foreva Fancy Boutique on the corner of Coconut Drive and Tarpon Street in San Pedro Town.

According to Aguilar, the fashion show had a great turn out, and the community had the opportunity to learn more about the Garifuna culture. “I decided to join with the San Pedro Garifuna Executive to assist the new executive to bring needed awareness about their rich culture to the island. So in an effort to introduce something different that has never been done in Belize before, we decided to this fashion show. Usually, the larger events celebrating the Garifuna Culture are focused in Southern Belize during the month of November, but hopefully with time, we see larger events also hosted on our island. This fashion show was a huge success, and we had a great turnout. Both locals and tourist enjoyed the presentation, drumming, and the Garifuna food,” said Aguilar.

After a final spectacular walk-through to the sounds of the live drumming, the show closed to much applause. The organizers of the fashion show would like to thank the following sponsors: the San Pedro Town Council, Rio Hotel, Tropic Air, Joey Harmouch, and Travellers Liquors.

On Sunday, November 13th, the NGCSPB held a Garifuna Mass at the San Pedro Roman Catholic Church at 10AM. The mass was certainly a celebration of the culture, with the council dressed in their traditional clothing celebrating mass. The Belize City Garifuna Choir sang to the rhythm of the Garifuna drums, adding a wonderful cultural touch to Sunday mass in San Pedro.

On behalf of the NGCSPB, everyone is invited to participate in the upcoming events and show support towards the Garifuna culture. On Friday, November 18th, another cultural show is scheduled to take place in the evening, and there will be a dance to set the tone for Garifuna Settlement Day with Punta Boys and the Caribbean Kings. On Garifuna Settlement Day on November 19th, the traditional reenactment of the first Garifuna settling in Belize will take place at 6AM. Afterwards, the council will parade around the town’s core, with live cultural music drumming, and Punta dancing.