San Pedro Town is once again in a festive mood with the anticipated ‘El Gran Carnaval de San Pedro,’ which started over the weekend. Official ceremonies were held on Saturday, February 10th at the Central Park under the theme ‘Canta, Baila, Y Goza!’ The festivities so far have attracted hundreds of residents and visitors alike, who are enjoying the block parties, and the colorful comparsa dance groups’ performances on the main streets of downtown San Pedro. 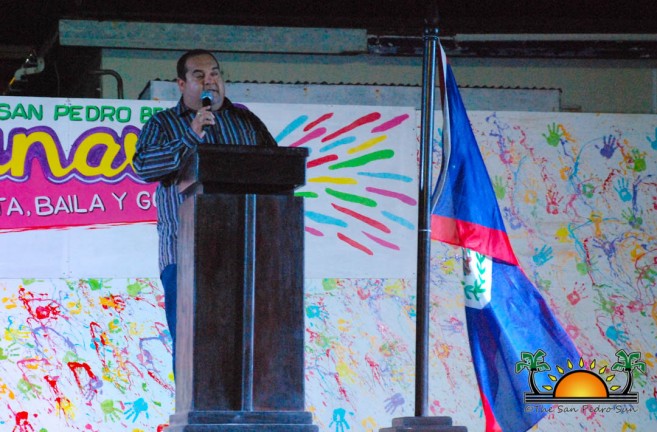 The three-day festivity kicked off with a short formal ceremony on Saturday with members of The San Pedro Town Council addressing the community. The event started with a minute of silence in memory of the late carnavalero Felix Ayuso. Ayuso’s family was presented with t-shirts commemorating the life of their deceased loved one. 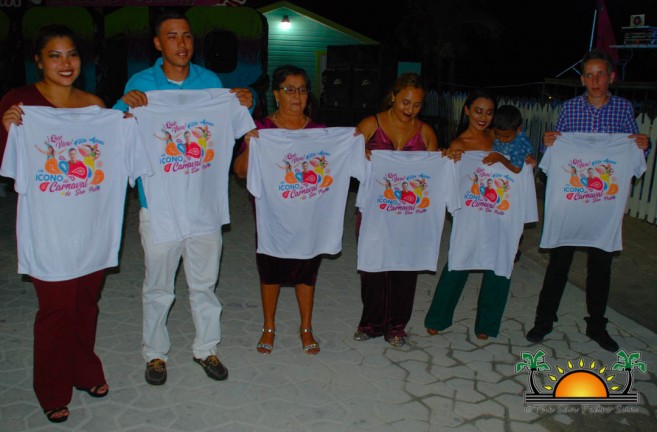 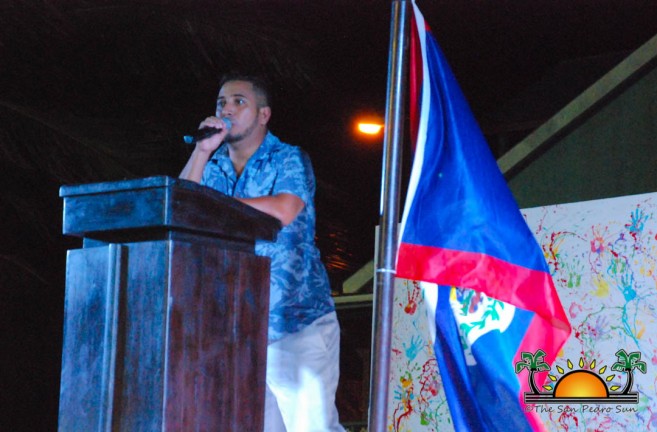 Councilor Hector ‘Tito’ Alamilla officially welcomed everyone to the event, remembering many ‘Carnavaleros’ such as Felix Ayuso, who have tremendously contributed to the island’s carnival tradition. He invited everyone to continue being part of the festivity and to keep the tradition alive. 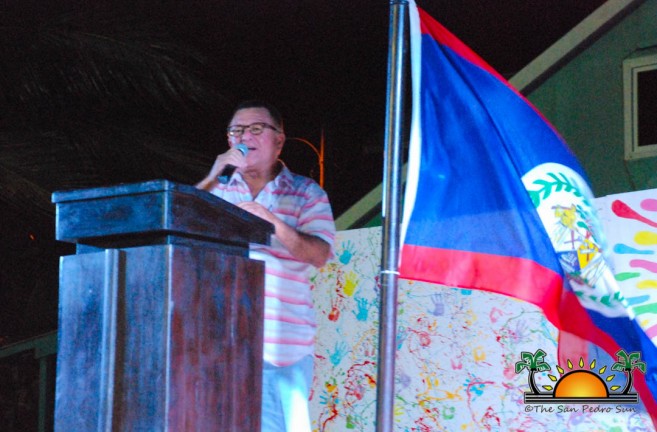 Minister of Tourism and Civil Aviation also shared a few remarks by remembering the late Felix Ayuso who will forever be remembered as the king of the carnival. “This year’s carnival is dedicated to our late Felix Ayuso who loved carnival so much,” he said. “Please continue supporting this fun tradition. I encourage you to have fun, but in a clean and respectful manner. Also, support the comparsa groups who raise funds for worthy causes around the island.” 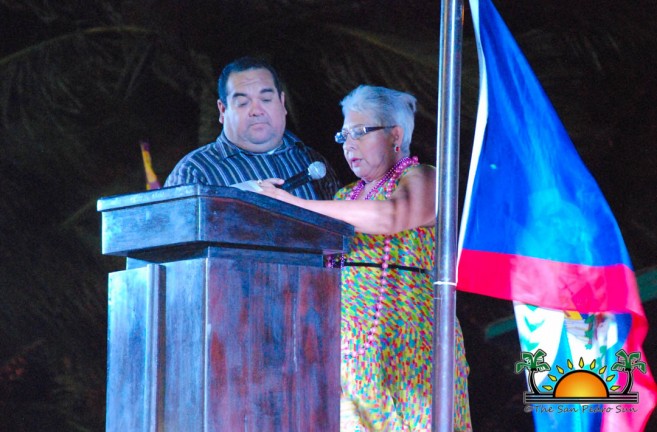 Councilor Flora Ancona then gave the closing remarks thanking everyone for their continued support. She also encouraged residents and visitors to engage in the celebration and enjoy the traditional event.

A series of dances and performances by the San Pedro Dance Academy and the Ambergris Caye Elementary School entertained the audience for the remaining of the evening. 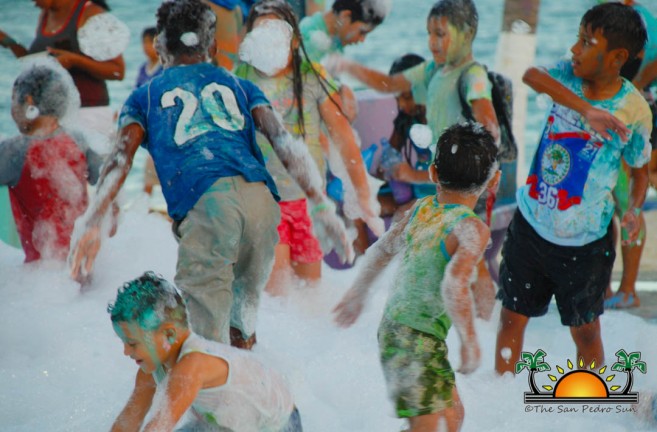 The carnival activities were in full force on Sunday, February 11th with a foam and painting party at the Central Park with DJ Debbie starting at 4PM. 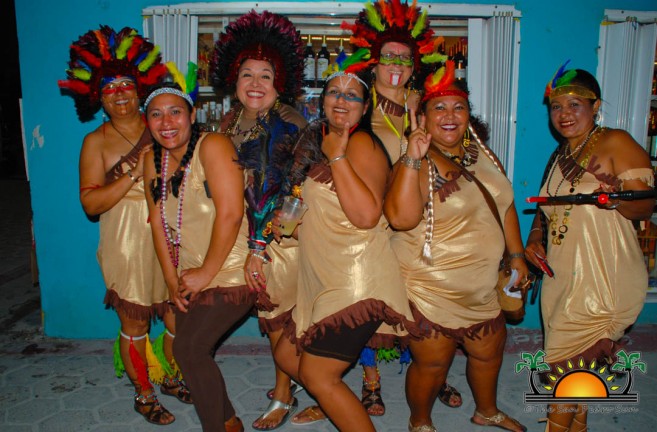 Meanwhile, two comparsa groups (Doña Flora Ancona’s Las Pocahontas, and Las Bad Bunnies), brought much fun to the spectators who danced and sang through main streets of the town. 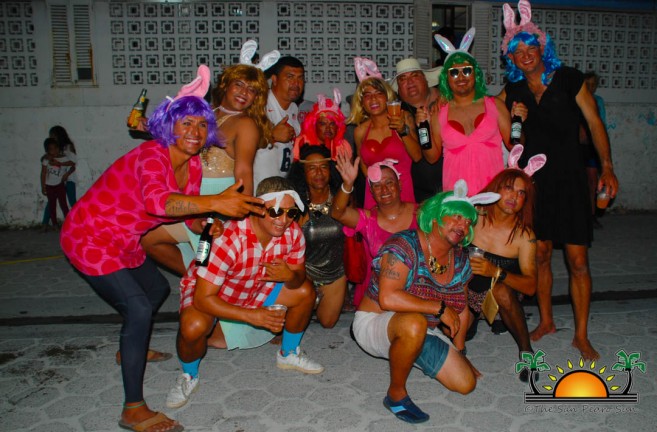 Among those who enjoyed the festivities was Doctor Doug Harris, who has been visiting the island for well over two decades just to be part of the carnival.

The festivities continued on Monday, February 12th with another round of comparsas presentations and of course more painting through the streets of downtown San Pedro after 4PM. Another block party was in full swing at the Central Park starting with lots of foam and painting. Meanwhile on Pescador Drive, ACES did a parody on U.S President Donald Trump on the immigration issues. Ancona’s comparsa took on to the street in a Cupid and Valentine’s Day theme. Their elaborate costumes drew loud cheers from the spectators, who followed the dancing all the way to Barrier Reef Drive. The Barbies were right behind Ancona’s, delighting their fans with a parody of ‘The Queen of the Bay’ pageant. A controversial incident when former Belize City Mayor Zenaida Moya, did not accept that the representative from the Stann Creek District had won the crown. Moya demanded that the representative from Orange Walk District, was the winner.

On Tuesday, it was ‘Fat Tuesday’ theme and the highlight of the festivities with the last block parties by the Central Park. Only two comparsas observed on the streets were Ancona’s and of course Las Barbies. Ancona’s once again wore their colourful and well decorated outfits dancing to sensational cumbia hits. Tourists and residents alike, danced, sang and even took advantage of every opportunity to take a picture with the dancers. Las Barbies were back in full force dancing to the beat of ‘Scooby Doo Pa Pa!’ The comparsas went until almost midnight culminating at the block party by the park where thousands of carnavaleros danced the night away.

Carnaval was officially closed on Wednesday, February 14th with the burning of Juan Carnaval. At around 8PM islanders convened at the Central Park to participate in the reading of Juan Carnaval’s will. Afterwards the traditional burning of his body took place. The activity is an island’s tradition as well as practice believed to expel bad luck and negative vibes from the island.

The San Pedro Town Council would like to thank everyone who helped in making the 2018 Carnaval a huge success. See you next year in El Gran Carnaval de San Pedro!

Creativity and Talent showcased at the SPDA’s Christmas Dance Show