« Older: Belizean attorney Lisa Shoman selected as a judge to the Caribbean Community Administrative Tribunal
Newer: » Belize is one of the First Countries to Support New Global Alliance “30by30”

Action movie to be filmed in San Pedro Town


The first Belizean action feature film is set to be produced in San Pedro Town by three Belizean filmmakers. Titled ‘Machiste’s Gold,’ the film is expected to be a high-end production, highlighting Belizean talent, and shaped by the services of an international filming crew that will see the end product compatible with international standards.
Heading the project is Belizean writer, director, producer, and editor Michael Flores. Flores owns Belize Liberator Productions Company in Belize City and is a three-time award-winning movie producer in the country. His latest project, titled ‘Just a Little Luck,’ can be viewed online. Joining the project is San Pedro’s very own actor/producer Horacio Louis Guerrero. He has participated in several films, from the pilot episode of La Isla Bonita Telenovela to being part of the second season of Telemundo’s popular Spanish series, ‘La Reina del Sur.’ The third talented Belizean involved in the planning of Machiste’s Gold is producer, cinematographer Jeremy Christoph. His experience includes the production of the Garifuna Collectives’ Hamala music video, among other local artists’ videos. 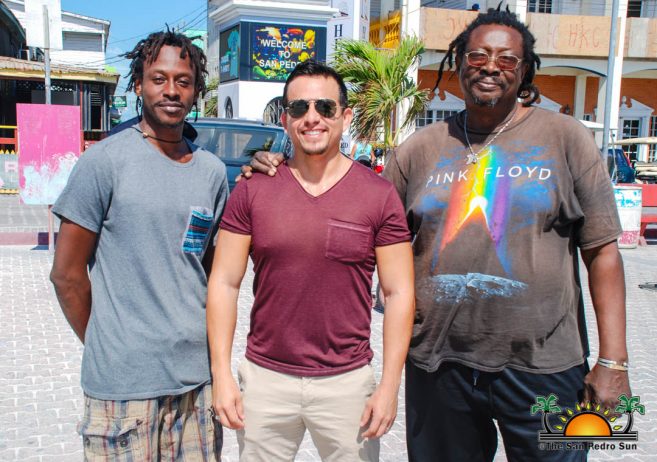 Flores shared with The San Pedro Sun that they are excited about the film, which will be considered the first action movie done in Belize. To bring the drama to a high caliber, they will join efforts with a filming company from Cancun, Mexico called ‘Riviera Maya Grip.’ “They will supply us with all the necessary tools that we need to make the movie competitive at the international level,” said Flores. The storyline follows the story of a native Belizean who makes a living from gold panning. He eventually finds some gold and heads to San Pedro Town to sell it. But in an unfortunate twist, both the gold and the monies from a potential buyer are stolen by criminal elements. The climax of the story tells of the hunt for the criminals in an attempt to recover the stolen goods.
Flores added that this is not the first time they will be filming on La Isla Bonita. He invites all Belizean talented artists to join them in this project as they will be looking for music production for this filming project. He encourages islanders to get involved in the project as it is a great opportunity for anyone interested in this industry.
Guerrero will play as the lead actor in Machiste’s Gold, and over the past month, he has been preparing to get into character. His role will involve martial arts, thus, he has been training with MMA Instructor Martin Dawson from Dawson’s Pit Fighters. “His classes have been very helpful as I begin to prepare mentally and physically for my character,” said Guerrero. He looks forward to this movie project, which promises to be like no other in Belize.
In the upcoming weeks, the team will meet with representatives from Riviera Maya Grip in Mexico to discuss details of the production. Following the meeting, a starting date for filming is expected to be announced, and thereafter, auditions to fill certain roles in the movie will take place on the island.

The National Institute of Culture and History (NICH) Mourns the Passing of Mrs. Alice Craig