On September 28th the San Pedro Town Council (SPTC) held a meeting with local street artisans. The vendors were told that within two weeks they will need to remove their tables from along downtown Barrier Reef Drive and set-up business under the grand Palapa at the Central Park. Presently there is a group of about fifteen artisans that line the street beginning at Central Park and ending north at Fido’s Courtyard. At these various booths, which are mainly constructed of wooden tables measuring about 4” by 8”, there is a wide assortment of handmade jewelry, carvings and other hand crafted gift items for tourists and locals alike. According to SPTC’s Foreman, Mr. Samuel Gonzalez, the space under the Palapa where the 15 vendors will be re-located measures approximately 1,200 sq. feet.

According to some vendors, they have been using the street area to conduct their business for the last four – six years. Their fears are that this move will hurt the modest income that they currently have. In the last five years the Town Council has asked them to move three times. First they were moved from Central Park when renovations began in 2006, then to the beach in front of Fido’s, and then to the street. 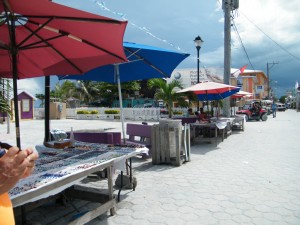 In an interview with Mr. Severo Guerrero, Deputy Mayor at the San Pedro Town Council, Guerrero told The San Pedro Sun, “We are not removing them. We are simply re-locating them. Like the Mayor told them the other evening in that meeting, the park is for the public.” According to Mr. Guerrero the vendors use up most of the benches lining the park on the street side and in some instances, even prevent citizens from being able to access Central Park. He went onto explain, “We are going put them under the Palapa and give them tables measuring 4” by 4” and that’s what they’re going to be using.” Mr. Guerrero went on to explain that this is a problem that has been escalating. Initially, and what is still the plan, is to have all the vendors at the Saca Chispas – once the renovation project for that area is completed. However, in the interim, they are causing street congestion among other issues. “More and more people are relocating to the park to sell their things. We even have people selling clothes! Parks are not for that. The park is for the people to enjoy. They are occupying all the space out there. They use like three or four tables each, people can’t even get through to get at the park, we have also spoken with them in regards to maintaining the place clean but some have not even been complying with that!”

Vendors will now be forced to reduce the surface space available for marketing their goods by using tables half the size they are used to. As to what the plan is for maintaining the Palapa; Mr. Guerrero doesn’t have a plan as yet. He did mention, however, that there will be a police officer permanently situated at the Palapa while the vendors are. However, before this is done, much repairs need to be done on the existing structure, which he admits leaks when it rains. Further to this, the vendors will be required to re-locate whenever there are public events such as Lobster Fest, September celebrations and so forth. As to where they will relocate during these activities, that has not yet been determined.