Home » Business & Economy » No bluff, no bluster, no bravado: Belize lays out its case

No bluff, no bluster, no bravado: Belize lays out its case 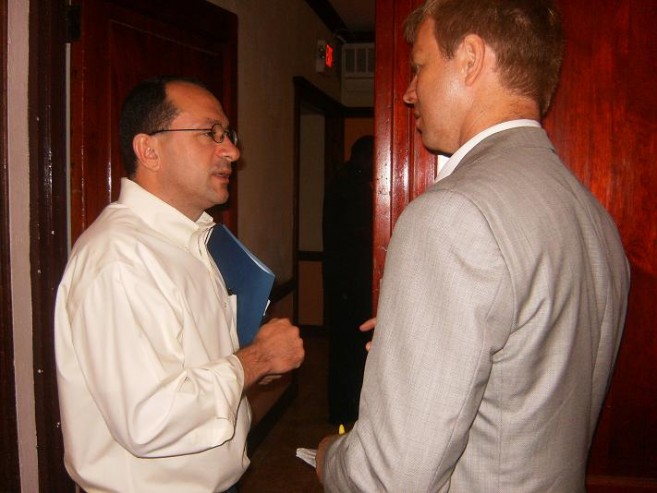 Belize negotiating team leader Ambassador Mark Espat pauses before hurrying off to catch a flight to have a brief conversation with Bill Faries of Bloomberg News. The local media has complained that little information had been forthcoming on the debt restructuring exercise currently underway.

Prime Minister and Minister of Finance Hon. Dean Barrow tried on Wednesday, August 22nd to end months of uncertainty and speculation regarding his government’s attempt to re-structure the so-called “Superbond”.

Speaking to an assembly of some of his Cabinet ministers and their entourages, and reporters, and flanked by his debt negotiating team comprised of Financial Secretary Joseph Waight, Immigration Minister Godwin Hulse, Ambassador Mark Espat and Central Bank Governor Glenn Ysaguirre, he said that he had called today’s press conference to not only “provide all information possible” but also “to seek support, to rally the country behind” the re-structuring effort.

The $1.1Billion bond accounts for almost a third of the country’s national debt, and almost 40% of its foreign debt. Barrow noted in his introduction that he had announced the re-structuring exercise before the March 7 general election and his administration had started on it almost immediately thereafter but following the recent publication of three proposed “indicative restructuring scenarios” and last week’s announcement that Belize would not be making a scheduled $46 million payment, interest had intensified.

Interest on the bond had stepped up 6% from to 8.5% this year as part of the original terms reached with investors in 2007, and the Barrow administration had estimated that its fiscal deficit will climb to 2.5% of GDP this year from 1.1% last year. He blames an anemic recovery from the world economic crisis of 2008, declining oil production and what he called “the unavoidable intervention in the public utilities sector leading to the acquisition of BTL and BEL” as the main reasons why they could not continue to meet the debt re-payment schedule.

Following the March elections a Debt Review Team was appointed and a “comprehensive debt review” undertaken. On June 20, the Government of Belize published a Financial and Economic Update, which the Prime Minister said, signaled “the completion of the review process and confirming the formal decision to restructure (our external commercial debt) the Superbond.”

He claimed that the update “included estimates of the financing gaps Belize would face in the short term, in the absence of material debt relief” and that “those gaps were as large as 8% of GDP.”

He revealed that the “Negotiating Team” was being “assisted by external debt advisors, White Oak Advisory”, and had begun discussion with multiple individual creditors amounting to, by face value, over 85% of the Superbond holders” and that they had exchanged “preliminary views … with advisors to a Creditor Committee formed to represent some individual bondholders that had banded into a group”.

Last week Tuesday the Government of Belize announced that it would not be making the interest payment due on August 20. In his budget presentation last month Barrow had said that while they had included almost $100 million for debt service payments for the Superbond in the FY2012.2013 budget, they had not identified the source of funding for the August payment.

He also said that the proposed alternative terms were not a “formal offer to bondholders” and were instead “our calculations as to the nature and relief that our circumstances demand, and are intended to serve as a basis for the detailed discussions now with bondholders.”

While the Government of Belize is prepared to discuss what the Prime Minister called “alternative structures and approaches that could achieve similar ends” and “are prepared to consider and discuss any proposal that creditors may wish to put on the table”, he also said that “the Government of Belize will only accept a resolution that fully reflects the country’s capacity to pay. Debt sustainability is the whole and entire object of the exercise, which brooks no other possibility.”

After noting that there had yet to be any face-to-face meeting with the creditor committee, he revealed that his “Belize Team has also been exploring the possibilities for settling the so-called additional liabilities; namely, compensation for the BTL and BEL shares. However, initial contacts in this regard have not to date yielded serious progress.”

He further announced that the team had met with some of the nation’s other creditors, namely the international financial institutions, and particularly the Inter-American Development Bank (IDB) and the International Monetary Fund (IMF), and that a “package of fiscal policy measures was negotiated with the former and has been fully implemented.”

He pointedly noted that the team had “consulted with a host of social partners including the Belize Chamber of Commerce and Industry, Belize Tourism Industry Association, the National Trade Union Congress of Belize, COLA, ORINCO, APAMO, representatives of the banking sector, and the Council of Churches” and that the response had been positive, calling support for the “debt exercise … already broad and deep”, and promised that the dialogue would continue.

He concluded by saying that “Superbond holders are NOT being asked to serve as first responders to Belize’s public debt crisis. In fact, our approach to these creditors comes only after making painful sacrifices and satisfying ourselves that no other choice any longer exists.”

“This debt blaze is truly a bonfire of the last administration’s obscene financial vanities. And it was foreordained between 2000 and 2005 when the match of short term, high interest debt was lit. Five years of prudent macro-economic management and non-commercial borrowing temporarily contained the flames. But now the conflagration once again is upon us. And for the benefit of Belizeans, and our long term creditors, it is time to put out this fire once and for good.

My administration is thus unshakeable in its determination to secure the relief necessary to place the public debt on a sustainable footing and remove the prospect of immolation. And we will go as long as we have to and do whatever we must to accomplish this. For it is neither bluff, bluster nor bravado, when we say that nothing else will suffice.”

Following his presentation PM Barrow took questions from the media, and wished several members of the team good luck as they hurried off to catch a flight to Washington and meetings with IDB and IMF representatives.

Bill Faries, of Bloomberg News immediately asked if the Government of Belize could “afford to stay out of international credit markets and face lawsuits if there is a full default and if no agreement is reached during this grace period?” Barrow told him yes, and while they wished to avoid such a scenario they were prepared if that was to occur.

In answer to several other questions the Prime Minister tried to make the case that his administration had done everything possible to avoid default but was short on specifics. He explained further that the team was meeting with the IDB particularly because Belize was seeking a policy based loan (PBL) to help close its looming budget deficit, To that end there will be a Special Sitting of the House of Representatives tomorrow Thursday, August 23, 2012, to pass several bills (removal of a number of items from the quantitative restriction list, passage of the new banks and financial institutions act, consolidation of several revenue departments), and the adoption of a crisis management plan from the Central Bank all of which the administration hope will cause the IDB to look favourably on its request for a PBL, and soften the blow that the imminent default posed.

Prime Minister Barrow argued that while the decision to default had been made several months ago, there was still time, several months in fact, in which to reach amicable agreements with bondholders, and the previous owners of BTL and BEL, even if negotiations with those entities have so far been fruitless.

He strived to make the case that Belize would be all right, and that there would be no need for further “belt tightening” because all that could be done had been done.

In response to queries regarding possible devaluation and/or Belize entering a standby arrangement for the second time in its history, Barrow waved away the probability of the former by pointing to over $200 million in Belize’s foreign reserves.

On the latter, however, he was more cautious saying: “That is one of the reasons of the team leaving today to talk to the I.D.B. Quite frankly what is happening, I think there are those who would want to see us in fact engage in a standby arrangement with the IMF and there are those who might feel that in trying to engage the I.D.B., we are doing an end-run around the I.M.F., which is not so. We are talking to both of them and we are seeing how together they might offer some assistance. What is clear, we have signaled from the beginning that we are not going to go into any I.M.F. program. So if that is make or break, then break there will be.”