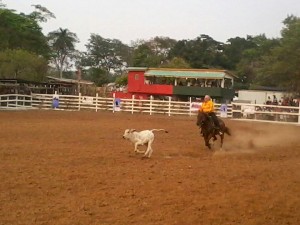 What started as a simple show giving light to agricultural practices and success in Belize has become one of the country’s major events, attracting thousands of Belizeans – despite the fierce heat – to the nation’s capital each year. The city of Belmopan hosted its 44th annual National Agriculture & Trade Show (Agric) on May 3rd – 5th 2013 and this year was no different when thousands of faithful Agric-goers showed up, enjoyed great food, drink and what the private and public sector had to offer while taking note of the significant improvements to the grounds. Mr. Eugene Waight, Chairman of the National Agriculture & Trade Show explained that the purpose of these renovations is to attract other stakeholders who would be interested in using the grounds for other events. 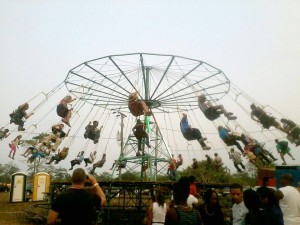 Improvements to the show grounds include the addition of the secondary roads that helped control traffic. Before, the main road was used by both cargo vehicles and people making their way around, now the pressure has been taken off that main road and vehicles have easier access within the compound. Added security measures were taken with the installation of metal detectors at the new main entrance in a new building sponsored by the Belize Telecommunications Limited. Also, the main stage where Love FM hosted their live coverage of the weekend’s events was rebuilt by the Government of Belize, a BZ$105,000 project. Both buildings were commemorated on Friday, May 3rd at 3:30PM prior to the opening of the weekend festivities. Additionally, two parks for kids were donated by the Wood Stop in Belmopan and constructed strategically in a quieter and less populated area for young children. Mr. Waight also explained that the activities are now and forever divided into a Bar/Drinking Section beginning from the northern tip of the Agric grounds and ending at the infamous Running W’s Meats stall. The No Bar/Drinking Section begins south of Running W Meats and continues into the children’s favored area, the Mexican and Guatemalan carnival rides. The Development Finance Corporation also assisted with the renovations by donating a dozen wooden chairs alongside the main road for the weary to rest on. 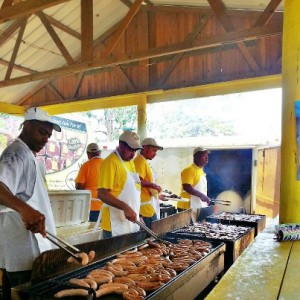 Corporate sponsorship wasn’t the only finance that assisted in improving this year’s NATS. The Spanish Lookout community also pitched in by building a food court for food vendors, tore down the eyesore dancehall that had been abandoned for many years and donated the sawdust used in the petting zoo area. The most significant change however, was the Rodeo grounds. The Ministry of Agriculture greatly improved it by erecting a building that would be able to hold more people and allow for drinks to be sold. The Rodeo and Motocross events were held on Sunday, May 5th when the majority of the Agric population was sure to be present. Crowd favorites include the Running W Meats grill station where the food was so great that people stood in line for 30-40 minutes for succulent steak, with fresh tortillas and sizzling sausage on a stick, refreshing beverage booths such as; Citrus Products of Belize fruit juices, Big H Juices, Belikin Beer, Kubuli Lager Beer and Heineken Beer to wash it all down. There were different vendors showcasing their artwork as well. This three day event highlights the economic and agricultural growth in Belize as well as provides a great day out for family and friends.