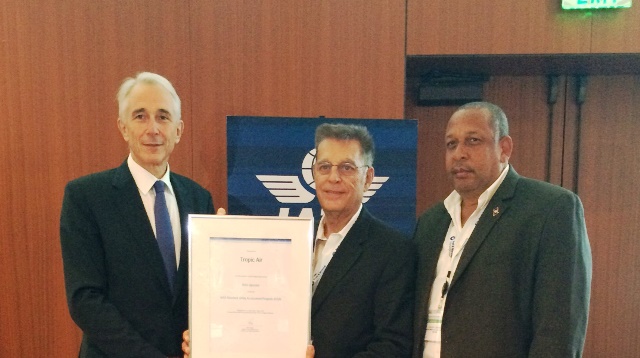 At the ceremony, it was explained that the ISSA Certification was designed in order to assist smaller airlines who do not qualify for the World Safety Record of the IATA Operational Safety Audit (IOSA). The World Safety Record of the IOSA is given to larger aircraft with more than 5,700 kilograms of weight and business model adapted to the IOSA requirements. The ISSA standard provides the same benefit for safety and operational efficiency as IOSA.
Proof of the certification was handed over Steven Schulte, Chief Executive Officer (CEO) of Tropic Air by Tony Tyler, director general and CEO of IATA. “Earlier this year we launched the ISSA. While ISSA is not a substitute for IOSA, it is a valuable operational benchmark. Tropic Air was among the first airlines to express interest in ISSA and they helped us to beta-test the standard, so congratulations to Tropic Air,” said Tyler. Also present at the ceremony was Lindsay Garbutt, Director of the Civil Aviation Administration of Belize.
Tropic Air was founded in 1979 as had since become the leading local airline of Belize.

Pump prices for diesel and kerosene go up