On Wednesday, June 26th the Statistical Institute of Belize (SIB) released their latest figures in the consumer price index, external trade, 1st quarter 2019 gross domestic product, and the preliminary results for the April round of the 2019 Labor Force Survey. The report indicates that the economy has grown by 5.2% in the first quarter of 2019, due to the unemployment rate dropping to 7. 6% in April 2019. While Consumer Price was virtually unchanged in May 2019, imports went up, and exports decreased in May 2019. 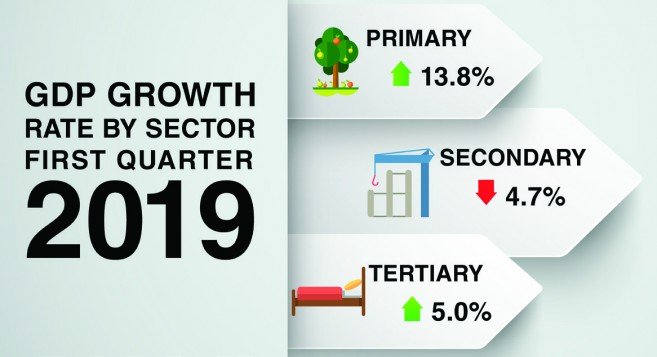 According to the SIB report, for the first three months of 2019, Belize’s economy saw a 5.2 % increase in the overall level of production when compared to the same period in 2018. The total value of goods and services produced in Belize was $782 million, up $38.6 million from the $743.4 million produced in the first quarter of 2018. Also, the SIB’s preliminary results from its April Labor Force Survey indicated that the national unemployment rate for that month was 7.6 %, a decrease of 1.8 % from 2018’s 9.4 %. This has been the lowest rate ever recorded and resulted from a net increase of 8,478 in the number of persons with jobs coupled with several persons exiting the labor force.
Figures released by the SIB also show that the All-Items Consumer Price Index stood at 104.7 in both May 2018 and May 2019. The cost of goods and services regularly purchased remained relatively unchanged in comparison to the same period last year. For the first five months of 2019, a year-to-date inflation rate of 0.1 percent was recorded. 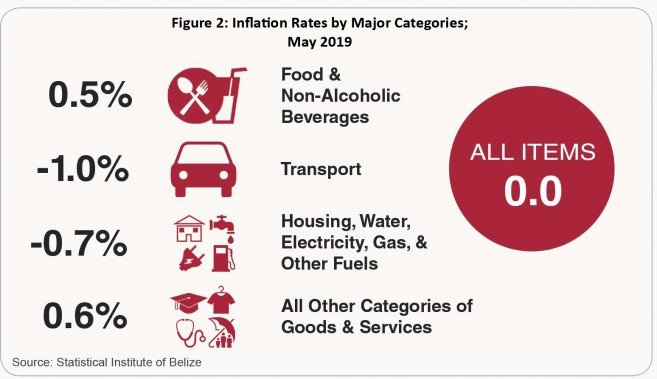 The ‘Food and Non-Alcoholic Beverages’ category saw an overall increase of 0.5 % during May 2019, due to a noticeable rise in the average prices of several meat products, including ground beef, beef steak, pork chops, and pigtail. Additionally, higher prices for several fruits and vegetables, including pineapple, watermelon, cabbage, sweet pepper, and lettuce, contributed to the overall rise in this category. The ‘Transport’ category recorded a 1% decrease for May 2019. Prices for ‘Housing Water, Electricity, Gas and Other Fuels’ were recorded at a 0.7 % decline during the period. For May 2019, the remaining categories of goods and services saw prices rise by an average of 0.6 %, offsetting much of the price reductions recorded across the other major categories during the month.
Punta Gorda Town experienced the highest monthly increase in consumer prices, recording a 3.2% inflation rate for May 2019. Consumers in Punta Gorda experienced above-average increases in ‘Food and Non- Alcoholic Beverages,’ home rental costs, and admission fees to sporting events. Meanwhile, Dangriga Town reported the lowest inflation rate for the month, with prices declining by 5.4 % on average in this municipality. Consumers in Dangriga Town experienced significant decreases in home rental costs and outpatient medical services such as surgery costs and lab fees. 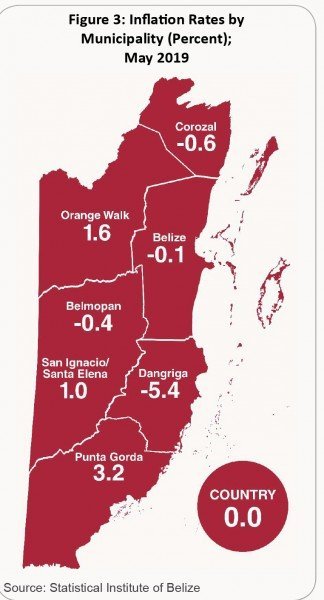 San Pedro Town was not mentioned among the municipalities with the highest inflation rates, but island residents believe that the cost of living is still high on the island. “I believe that we are the municipality that has the highest cost of living in Belize. Goods and services, home rentals and fuels, among other things, are more expensive here than in the mainland, due to most of these goods being shipped by barge, plus San Pedro is a touristic destination,” said one island resident.
SIB also stated that in May 2019, Belize imported goods valued at $169.4 million. This represented a 1.9 % or $3.1 million increase from the same month last year. Merchandise imports for the first five months of 2019 totaled to $771.8 million, representing a 2.6 % or $19.5 million increase from the same period last year. The total value of Belize’s domestic exports for May 2019 was $37.1 million, down by 35.6 % or $20.5 million from the $57.6 million recorded for May 2018. Merchandise exports for the period January to May 2019 totaled to $176.8 million, down by 6.4 % or a little over $12 million from the same period last year.

The SIB tracks monthly statistics on consumer prices and inflation and twice a year on the employment rate. To learn more about the SIB reports and Belize’s current economic situation you can visit www.sib.org.bz/

Analysis of the State of the Nation’s Economy