« Older: William Narod is new president of the Rotary Club of Ambergris Caye
Newer: » The world’s most ethical and sustainable shrimp comes from Belize


The Statistical Institute of Belize (SIB) has released their latest figures in the consumer price index, external trade and the 2nd quarter figures for the 2019 gross domestic product. According to the SIB, the country’s economy has declined by 0.8% in the 2nd quarter of 2019, while imports went up by 15.6% and domestic exports went up by 44.1 % for July 2019. 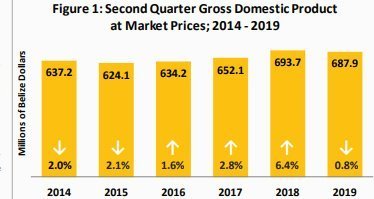 SIB reports that in July of 2019, Belize imported goods valued at $191.4 million. This represented a 15.6% ($25.8 million) increase from the same month last year. Merchandise imports for the first seven months of 2019 totaled 1.1 billion, representing a 3.9 % ($43 million) increase from the same period of last year. Meanwhile, the total value of Belize’s domestic exports for July 2019 was $43 million, up by 44.1 % or $14.1 million from the $31.9 million recorded for July of 2018. Merchandise exports for the period of January to July 2019 totaled to $252.2 million, down by 1.5 % (or little under $3.8 million) from the same period last year.
SIB Statistician Tiffany Vasquez gave a breakdown of the different categories of imports. “Food imports which made up 12% of all imports grew by $4.3 million dollars to $134.6 million over the seven month period attributable to increased purchases across a variety of grocery items including lard or shortening, and milk, both powdered and boxed. Greater purchases across most commodity categories led to the growth in total imports over the seven month period. The minimum fuels and lubricants category which accounted for 16% of total imports rose most significantly by $22.6 million to almost $181 million, owing largely to increase imported quantities of both diesel and kerosene fuels,” she said. (Excerpted from http://lovefm.com/)
For the 2nd quarter of 2019, SIB also reported that Belize’s economy saw a decrease of 0.08% in the overall production level when compared to the same period of 2018. The total value of goods and services produced in Belize was $687.9 million down by $5.8 million from $693.7 million produced in the 2nd quarter of 2018.

In addition, figures released show that the All-Items Consumer Price Index stood at 104.8% in July 2019. A decrease of 2% (105.0%) from July 2018. This indicated that, on average, Belizeans households experienced a very small decrease of 0.2 % in the prices of regularly purchased goods and services. For the first seven months of 2019, a year-to-date inflation rate of 0.02 % was recorded
The SIB tracks monthly statistics on consumer prices and inflation and twice a year on the employment rate. To learn more about the SIB reports and Belize’s current economic situation, you can visit www.sib.org.bz/