« Older: Belize on an Economic Activity Decline
Newer: » Minister Heredia says fluctuations in tourism will not affect overall arrivals for 2019

Unemployment rate on a rise: SIB reports 10.4% of Belize’s labour force without jobs


As the year winds down, The Statistical Institute of Belize (SIB) is reporting that the national unemployment rate continues to grow. According to their most recent Labour Force Survey (LFS) in September of 2019, the national unemployment rate grew from 7.7% in April 2019 to 10.4% in September 2019. SIB goes on to report that Belize’s labour force is growing faster than the rate at which new jobs are being created. 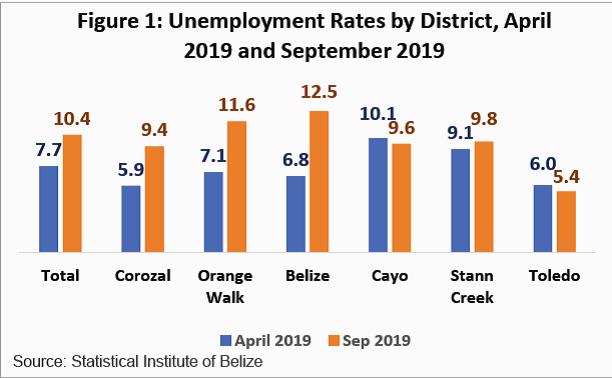 According to the report, “The level of joblessness in the country increased by 2.7 percentage points to 10.4 percent between the April and September 2019 rounds of the Labour Force Survey. This was primarily due to more persons, especially women, entering the labour force than there were new jobs available. Overall, the number of unemployed persons rose by 6,191 persons, from 13,658 in April to 19,849 in September. Of these, almost three-quarters or 4,554 were females.” All districts except Cayo and Toledo saw an increase in unemployment rate, with the Belize District having the highest and sharpest unemployment rate increase. 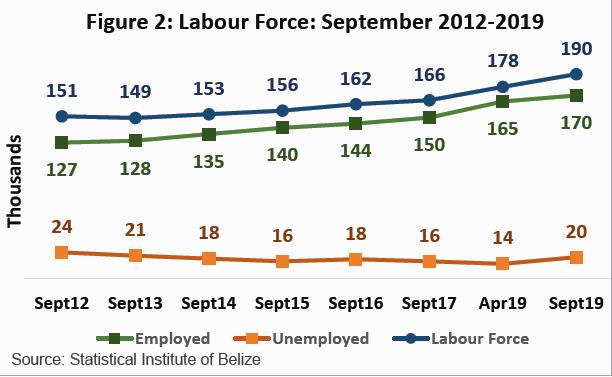 Belize is approximate to have a national labour force of around 190,307 with 56% being male while 42% are women. Astoundingly close to half, 44% of those in the labour force have nothing more than a primary level education, while 25% have a secondary level education and only about 17% have tertiary or high level studies. The remaining 14% of those in the labour force are recoded as having not completed a formal education. “The median monthly income for September 2019 was $1,134, a decrease of $110 since April 2019, as there were fewer jobs in the higher paid categories such as ‘Managers’ and ‘Professionals,’ and more jobs created in the ‘Skilled Agriculture Workers’ and ‘Elementary occupations’ categories. The highest paid jobs were observed in the ‘Government Services’ industry, which provides jobs to 9.4% of all employed persons and had a median income of $1,681 monthly,” explained the SIB report. 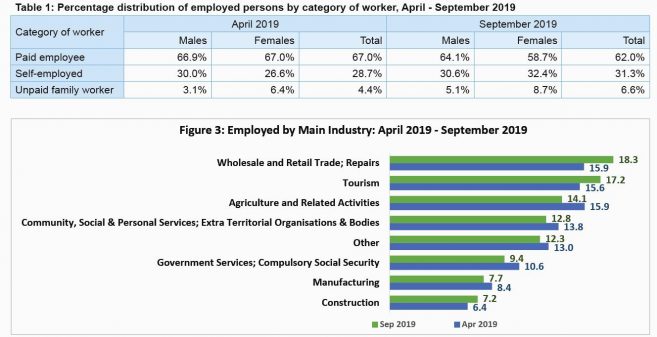 The report also indicated that “among the ten major occupation classifications, the largest gains in employment were seen in ‘Services and Sales Workers’ and ‘Elementary Occupations,’ with these two categories combined accounting for half of all jobs in the country.” The tourism industry provides jobs for 17.2% of the employed labour force. SIB also noted that a significant number of persons in the labour force have created their own employment by opening their own businesses particularly in the areas of ‘Services and Sales,’ ‘Elementary Occupations’, and ‘Agricultural and Related Activities.’
The next labour force survey will be conducted in April 2020. These surveys are conducted for the persons 14 years or older that are employed or interested in employment. For more information visit http://sib.org.bz/statistics/labour-force/