After being approved by the House of Representatives on Monday, April 27th, a day later, the Senate debated the two-month extension of the National State of Emergency before unanimously agreeing to it. The motion will now await the signature of the Governor General His Excellency Sir Colville Young before it becomes a law. 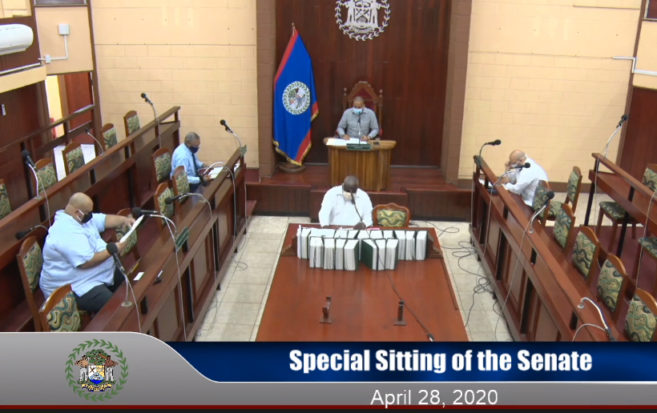 The debate took place inside the National Assembly, where Senator and Leader of Government Business Honourable Godwin Hulse, Business Senator from the Opposition (People’s United Party) Honourable Michel Chebat, Government Senator and Attorney General Honourable Michael Peyrefitte and Senator for Trade Unions and Civil Society Elena Smith discussed the proposal. Senator Hulse opened the session by introducing the proposal and indicated that an extension was needed because the country continues in a persistent State of Emergency. 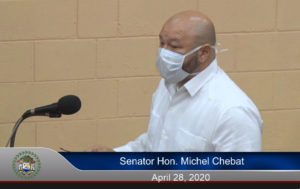 Senator from the Opposition Chebat called out the government on the closure of the financial assistance portal to those affected by COVID-19. He argued that from the over 80,000 that applied only 27% were approved and that there are many Belizeans suffering with lack of food. He questioned why an extension to the State of Emergency where there have been no further cases and government has no clear plan to move forward. Chebat said that a 30-day extension could be better instead of 60 days to come up with a better plan and help those in most need.

Attorney General Peyrefitte lashed back at Chebat saying that his party is always criticizing even in times of crisis when they should join the national effort. Peyrefitte classified the People’s United Party as a bigger disease than COVID-19, who instead of helping are only concerned with making the current government look bad. Peyrefitte insisted that two months is enough time to strategize the combat against the disease and a plan of action to move the country forward. However, if things improve, the two-month extension can be cut short to one month by a resolution of the National Assembly.

Senator Smith commended the government for what it has been doing so far and acknowledged the need for the two-month extension. She noted that it will be for too long but that it is better to be safe than to be sorry.

Senator Hulse made the closing remarks of the debate pointing out that the country has enough food at the moment and efforts will be made to distribute it to those less fortunate. Afterwards, the Senators were asked by Senate President Darrell Bradley to vote on the motion, which was passed with little trouble.

Advancing the Business Momentum Between Belize and Mexico