« Older: Farewell to Dennisito
Newer: » Get it while it’s HOT!!!


It is a sad case, but it happens so often that the victims often resign to the fact. On Monday, August 25th, San Pedro Roman Catholic School teachers walked into the school compound to find that several classrooms and the principal’s office had been vandalized. Teachers suspect that the vandals hit the school all throughout the summer, but the most damage was done over this past weekend. Teachers noticed windows and furniture broken and graffiti on the walls and blackboards, and a most horrendous smell coming from those vandalized classrooms. Upon closer inspection, it was noted that faeces were also all over the floors of the affected classrooms. 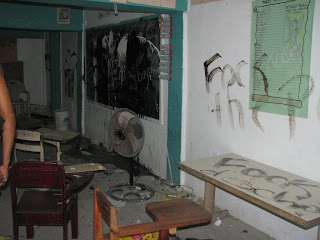 This was not the first time teh school has been a target.
Later, police were called to the school upon receiving information about some suspicious activity at San Pedro R.C. School. Upon arrival three male persons were found inside the classrooms and appeared to be highly intoxicated with a lot of empty bottles and containers around them. Police arrested and charged Edward Andrews 18yrs, Marvin Arevalo 17yrs both of San Juan Area and Oscar Diaz 17yrs of San Pedrito. All were jointly charged for Burglary. 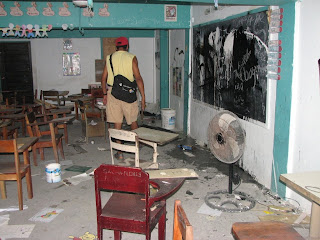 Teachers go thru what is left to salvage. 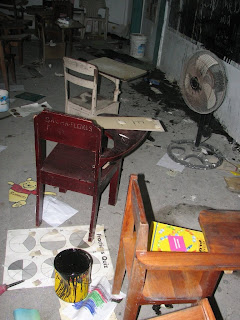 And worked together to clean it up and get it ready for class to begin on Monday.
Anyone who is interested in helping the San Pedro R.C. School can come over to the school or call 226-2550 and speak with acting Principal Mrs. Patricia Lopez.