Mexican billionaire Ricardo Salinas Pliego, owner of the yacht Azteca which caused damages to the reef just outside of San Pedro Town (http://sanpedrosun.blogspot.com/search?q=azteca) was ordered to pay a $787,000 fine after an assessment was carried out by the Department of the Environment (DOE). Pliego committed to pay on Holy Thursday before he sailed away. According to Jevon Hulse, acting Chief Environmental Officer stated that “It was my understanding that he (Ricardo Salinas Pliego) was expected to make arrangements for payment before sailing out of Belize.” 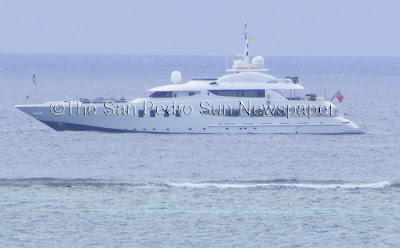 It is unconfirmed whether the monies were paid to the Ministry of Finance. However, according to our colleagues at El Diario de Quintana Roo Newspaper based out of Chetumal, Mexico, “Azteca” docked at port on the island of Cozumel on Good Friday. This would mean that the cost of damaged had to be settled before the vessel left Belizean waters, but as of press time, it was still unconfirmed whether or not those monies where in the Government coffers.

The Mexican billionaire was never arrested, instead his captain, forty-nine year old Salvador Villeras Eckart of Cancun, Mexico was detained. Eckart told authorities that that the vessel was drifting towards the reef after a rope tangled in the propeller, causing it to automatically shut down. He went on to explain that he had to drop anchor to avoid running aground. Salinas Pliego is a well known billionaire and owns of the Mexican television station, Azteca and the chain of appliance stores, Electra.

Letter to the Editor: Firecrackers