The President of the Republic of El Salvador was in Belize on Wednesday as part of his farewell visits to all Central American countries. His Excellency President Elias Saca and his wife Ana Ligia Mixco Sol de Saca were greeted by the Chief of Protocol, Diana Locke and the Ambassador of El Salvador to Belize, Jose Sergio Mena. After a salute from the Belize Defense Force Quarter-guard, the President and his delegation was then transferred to the Radisson Forth George Hotel. 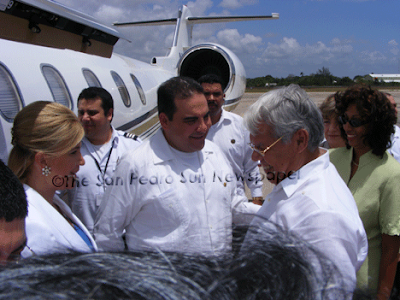 President Saca and his wife welcomed by Ambassador Mena

During a brief exchange at the Radisson Fort George Hotel, both PM Barrow and President Saca shared concerns relating to the region such as the swine flu that has caused alarm in Central America. Saca stated that even though there is no reported case of swine flu in El Salvador, authorities are on high alert. Barrow expressed that Belize is especially concerned because the flu is present in neighboring Mexico.

While the PM and President Saca meet in a private meeting, Mrs. Barrow and Mrs. Saca then departed for the spouses program to the Museum of Belize and Stella Maris School. Just before noon President Saca and his delegation toured the Old Belize Museum after which PM Barrow hosted the President to lunch. 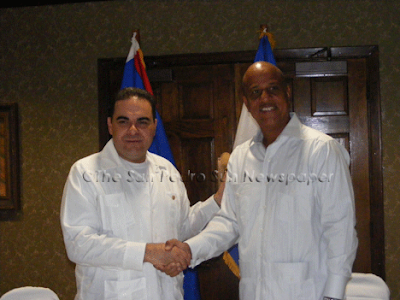 As part of the agenda, the PM Barrow conferred the Order of Belize on the President Saca, the highest award that can be given to a non-Belizean. PM Barrow was also honored with the Jose Matias Delgado National Order by the outgoing president of El Salvador. Following his five hour tour, President Saca left Belize, thanking the Government for the continuous international support Belize has showed towards El Salvador.