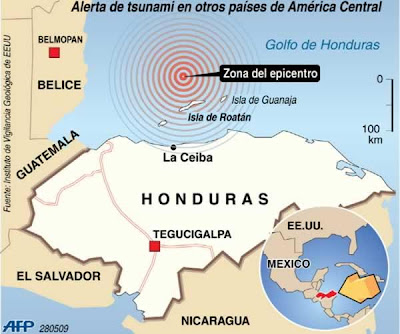 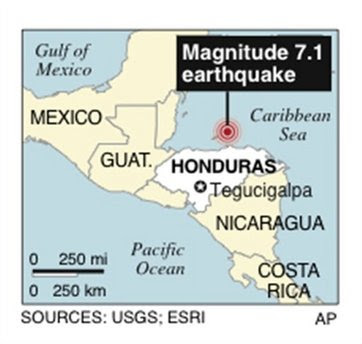 Love FM Belize and other international media outlets are reporting that the Tsunami Watch for Belize has been lifted.
An earthquake of magnitude 7.1 occurred 16.7N, 86.3W, North of Honduras on Thursday morning (May 28) at 2:24am Belize time. According to various reports, “…people rushed from their homes as glasses and framed pictures crashed off of shelves. At least five wooden houses on stilts collapsed in three towns and a water tower toppled in the town of Independence, local officials said.” Love FM confirmed that the homes and water tower affected were in fact in Monkey River. Structural damage also occurred in Placencia and Independence.
“I urge you not to panic, but to remain calm,” National Emergency Minister Melvin Hulse said on the radio. “Your government is monitoring the situation and will be keeping you informed.”
A tsunami watch was discontinued for Honduras, Belize and Guatemala.
Belize is out of the 60 mile radius of the localized area where a tsunami would be expected, and since the time frame for a tsunami to occur is a half hour after the earthquake, the possibility of Belize being affected by a tsunami is no more.
As of 5:00am Thursday, classes have not been cancelled, but teachers are being urged to keep the situation monitored at their schools in Punta Gorda, and inform NEMO.
Reports are also confirming that the water system in Monkey River has been affected, and classes may be cancelled in this area. At 5:30 am Belize time, Love FM received notice that the Mango Creek reservoir water tank was cracked as a result of the shock of the earthquake, but that there is backup. Also, no compromise to dam in the Cayo District has been reported as yet, but ground checks will be performed later today. No loss of life has been reported for Belize. Belizeans are being urged to return to normal activities.
One death has been reported in La Lima, Honduras. 14 year old, Ray Maldonado Fúnez was unable to get out of the room where he slept when the earthquake struck in his home at Pineda Dos de La Lima.
Information compiled via: Paul Mahung-Love FM Punta Gorda, Love FM Belize, Yahoo News and CNN. Stay tuned for more information as it becomes available.
Images from Honduras 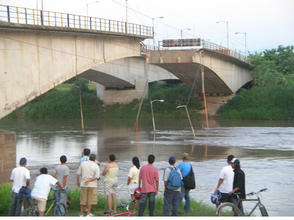 Puente La Democracia – The middle part of the bridge fell into the river Ulúa. 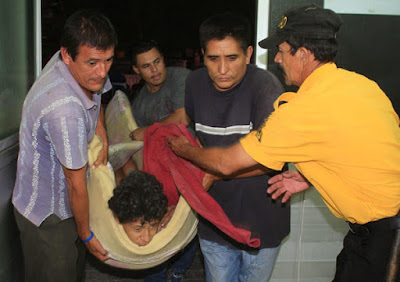 In Honduras, the injured are being treated at the necessary facilities.