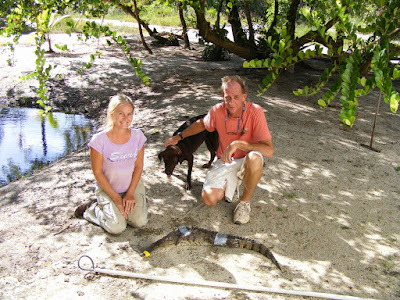 ACES Marine Biologist Cherie Chenot-Rose and Mr. Zimmers with captured “Crocky.”
Submited by Biologist Cherie Chenot-Rose, ACES/American Crocodile Education Sanctuary –
The morning of August 23rd the American Crocodile Education Sanctuary (ACES) received an e-mail from the Belize Forest Department in regards to a four foot crocodile terrorizing a dog in Placencia. ACES called Mr. Larry Zimmers, who confirmed the crocodile was in his pond in the back yard and he was afraid of it attacking his dog Tina. Offering the means to fund the croc’s relocation, Larry requested ACES come right away.

ACES sprang into action. Jumping into their Suzuki and loaded with croc gear, Vince and Cherie raced to the Hokey Pokey Water Taxi in Mango Creek. Reaching just in time, the boat was already full of people and about to leave dock when they squeezed in with all their gear and a thawing chicken. At the dock in Placencia they were met by Norm, a local Belizean who offered to drive them to Larry’s.

Upon reaching the pond, Larry and his friend Lou where searching for ‘Crocky.’ Call it a croc sense, but Crocky seemed to know that ACES was there to catch him and the stealthy crocodile was hiding. Not able to resist the deliciously rotting chicken that ACES had brought along, it wasn’t but minutes before Crocky had poked his head up for a bite. Instantly Vince snared him with his homemade ‘croc catcher’. Armed with nothing but a PVC tube that has a rope through it forming a noose, when slipped over a crocodile’s nose and around the neck, Vince can handle up to a 6 foot croc by himself. Crocky was caught, tied up and ready to travel in less then an hour.

While kicking back with the traditional ice cooled Belikin after a successful capture, we all watched Tina the dog bark her revenge to Crocky. Larry then drove Vince, Cherie and Crocky back to the Hokey Pokey Water Taxi, who kindly let Crocky, a four foot female Morelet’s crocodile, ride in the back of the boat for free. Back in Mango Creek, they paid the nice man who watches the cars and buckled up Crocky in the back seat of the car for the trip south to PG.

Upon reaching ACES thirty-six acre wildlife sanctuary on the Rio Grande River, Crocky received a complete health inspection and was released into a natural holding facility. With the ever increasing human-croc conflicts, ACES is currently over-run with Morelet’s, freshwater crocodiles. This particular croc will be desensitized to humans while at ACES and eventually be re-released into the wild at one of Belize’s National Forests. Thanks to the quick response of Wildlife Officer Rasheda Sampson of the Belize Forest Department, this croc-human conflict was resolved without harm or injury to either human or crocodile. Morelet’s Crocodiles are protected under the Belize Wildlife Protection ACT (Chapter 220) and considered vulnerable with only an estimated 10,000 to 20,000 left World-wide. ACES would like to give a special Thank You to Larry Zimmers for his donation in Taking a Bite Out of Extinction!

For more information about ACES please visit their website at http://www.americancrocodilesanctuary.org/