At least 22 dead as trains collide in India 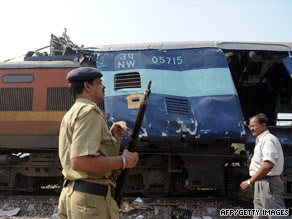 The Goa Express slammed into the stationary Mewar Express apparently because the driver overshot a signal to stop, said Anant Swaroop, spokesman for India’s northern railway.

Indian Railway Minister Mamata Banerjee ordered an inquiry into the crash, according to CNN’s sister station in India, CNN-IBN.

The Goa Express, bound for New Delhi from the western coastal state of Goa, was running on the same track as the Mewar, which shuttles between New Delhi and Udaipur, in western Rajasthan state. Both trains have stops in Mathura, about 90 miles south of New Delhi.

Rescuers had to cut trapped passengers from a wrecked car of the Mewar Express. The car had a special compartment for women, disabled passengers, cargo and train guards, said Aditya Verma, a senior police official in Mathura.

Bannerjee said victims’ relatives would receive compensation of about $10,000, according to CNN-IBN. Several other trains that go through the Mathura station had to be diverted. Trains are the most widely used mode of transportation for national travel in India.