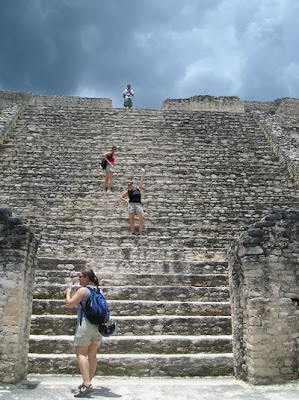 The ruins of Caracol are located in the Vaca Plateau of the Cayo District and recent studies performed by NASA have unearthed thousands of new structures using their most advanced technology. Utilizing NASA’s laser tools, researchers have discovered and illustrated in a 3D form, the complex urban centers built at the ancient Maya City of Caracol.
In a press briefing on Tuesday, May 11th, a NASA based group revealed information – which normally would take 25 years to collect – and was done over a span of 4 days gathered by using a technique called LiDar (light Detection and Ranging). Airborne LiDAR made research significantly easier, and faster, allowing researchers to see ‘beyond the rainforest’. Laser beams emitted from a plane were able to penetrate the thick canopy that covers the site to reach sensors on the ground. The laser survey then produced images of the ancient settlement and its surroundings, covering a 200 square kilometre radius in just four days. “It is very exciting,” said Arlen Chase, Anthropology Professor at the University of Central Florida, where the data is being analyzed. “The images not only reveal topography and built features, but also demonstrate the integration of residential groups, monumental architecture, roadways and agricultural terraces, vividly illustrating a complete communication, transportation and subsistence system.”
This breakthrough and results of the LiDAR mapping project in Caracol are significant. A total of eleven new causeways, five new causeway termini, tens of thousands of agricultural terraces and many hidden caves were located.

The new developments have prompted Nasa’s researchers to recreate the Caracol landscape in 3D model so as to better understand the Maya Civilization in an effort to discover clues as to what may have happened to the maya empire in that era.
Currently in the state of excavation and restoration Caracol is the largest known Maya center in Belize. The largest pyramid in Caracol, “Canaa” (Sky Place), rises 140 feet high, and it is the tallest manmade structure in all of Belize. Since Caracol is located in the Chiquibul Rain Forest, there is a plethora of flora and fauna to enhance the true beauty of this magnificent Maya center.
Caracol is an enormous ceremonial center, perhaps the largest site in Belize.