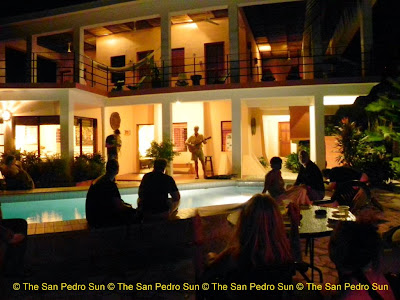 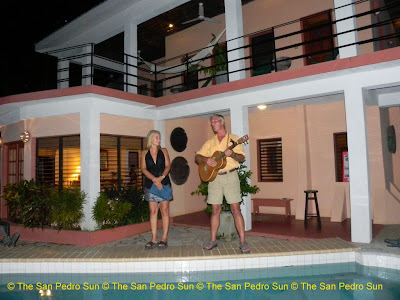 ACES founders Cherie & Vince Rose welcome their guests.
On Friday, August 13th the American Crocodile Education Sanctuary (ACES) held their first fund raising event ever at the Coral House Inn in Punta Gorda. Situated on the inviting ocean-side grounds and pool area of the Inn, the evening was well attended by local supporters and tourists visiting the area. Guests enjoyed live guitar music and vocals by “Croc Man” Vince Rose who is the Animal Behaviorist at ACES, savored a variety of hors d’oeuvres generously donated by friends and local businesses and sipped cocktails and drink specials. 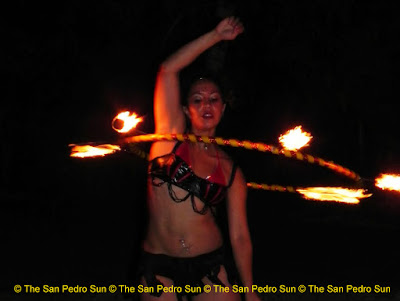 The night was highlighted by two fire dance performances by Marisa Tellez who is a student intern at ACES and a PhD candidate specializing in Crocodilian Parastiology. 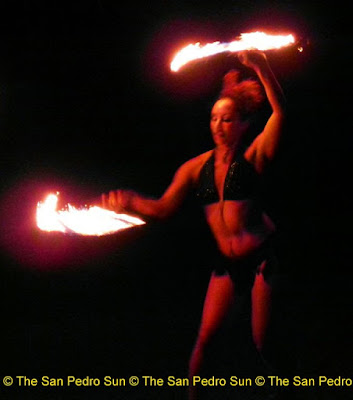 A raffle was held at the end of the night where guests anxiously awaited to hear if they had won cashew wine or a special tour of the ACES facility. The evening, full of socializing and entertainment was enjoyed by all who attended.
ACES is permitted by the Belize Forest Department (BFD) and rescues problematic, inhumanely and illegally kept crocodiles country-wide. Problematic crocodiles cannot be re-released because they have been fed by humans and now seek out humans as a food source. Instead of euthanizing these large reptiles, and in order to help save this threatened species from extinction, ACES contains the animals in secure, natural habitats where they are professionally cared for while educating local school children and raising public awareness on how to safely co-exist with these highly threatened apex predators. 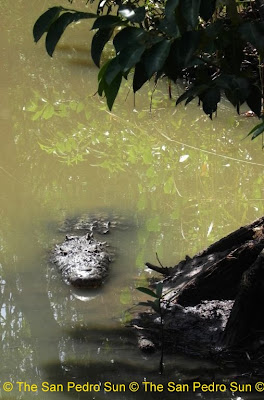 This problematic Amercian Crocodile, named “Satan” by the locals, is one of the many relocated to ACES from Ambergris Caye.
The proceeds raised from the recent fund raiser will enabled ACES to purchase one more roll of fencing for a new croc habitat at their facility. Currently 80% of the crocs housed at ACES are from Ambergris Caye where they had to be removed after deemed dangerous by the BFD. The new natural containment area will be for ‘Fast Eddie’, the 10 foot American Crocodile recently rescued from the WASA lagoon south of San Pedro. The croc was named after Eddie from Coastal Xpress in recognition of their generous support in quickly transporting two crocs to the mainland for their transport to ACES in Punta Gorda. The second croc, a female, was named Xanadu in appreciation for the hospitality and exceptional support from Xanadu Island Resort and Carts Belize. While Xanadu is residing nicely with three other rescued crocs from Ambergris, a new facility needs to be finished for Fast Eddie. Large male American Crocs over 10 feet need individual space or they will fight till death. $5,000BZ still needs to be raised to complete his new home. He is currently in a holding pen receiving special care until construction is completed. Fast Eddie is a very sick croc, lacking teeth just like the croc from Banyan Bay, “Bubbles” who passed away during a rescue effort. 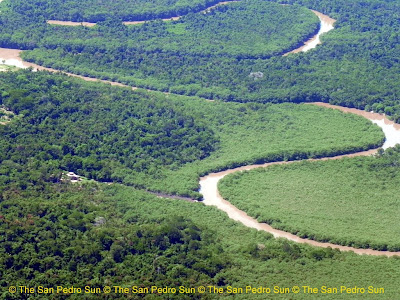 The ACES compound (left) is located on the Rio Grande river in Punta Gorda.
Cherie Chenot-Rose, ACES biologist, will be on the island the end of the month to discuss the extreme importance of a crocodile population survey on Ambergris Caye. According to Chenot-Rose, one of ACES long-term goals is to remedy the croc-human conflict on Ambergris by establishing a crocodile sanctuary on the island so that problematic crocs do not have to endure the stress of such a long transport. The sanctuary would not only provide a safe contained habitat for the problematic crocs right here on the island, but would provide a place for implementing an educational program at a facility where people could learn about the unique wildlife of the island. In addition, such a sanctuary would yield huge economic benefits to the community. The population assessment is the first step of a crocodilian conservation effort on Ambergris Caye.
ACES would like to thank all those who helped with the successful fund raiser. Cottontree Chocolate, Judith Supaul, Josephine Supaul, James Store, Whitts Store, Coral House Inn and The San Pedro Sun. For more information about ACES please visit their website at www.americancrocodilesanctuary.org.