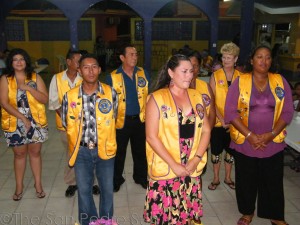 The San Pedro Lions Club has a new President. President Marina Kay took over responsibility from Melanie Paz in a special and symbolic ceremony on Saturday, July 9th at the San Pedro Lions Den. The event included the presentation of pins and recognition by outgoing president.

In her final address, the Outgoing President Melanie Paz outlined the many projects accomplished under her presidency. According to Paz, much of the work was attributed to the members of the club who volunteered their time. “The success of any club is due to the hard work of its members,” Paz said. In conclusion, Paz promised to work shoulder to shoulder with President Kay in moving the club forward.

In her remarks President Kay took the opportunity to ask her family, club members and the community to support her endeavors in making the club grow and become even more active. She thanked Paz for her contribution as President and said that she will continue to count on her activeness in the club.

The official installation of the President and her new board was conducted by Charter Member, Lion Pedro Salazar. Lion Salazar, in conducting the ceremony outlined that it was an honor to install the 36th Board having been a living witness and a founding member of the club 36 years ago. He told the club members that the installation is a symbolic ceremony, one that members should take advantage of to renew their commitment to the club. The new board consists of President Marina Kay, Vice President Mel Spain, Secretary Jorge Aldana, Treasure Abel Guerrero, Membership Chairperson Enes Anderson, Lion Tamer Janet Brown, Public Relations Tamara Sniffin and Tail Twister Paula “Pedie” Palaza. The Directors are Francisco Verde, Stephen Manuel and Vianie Perez.