Home » Community and Society » The Partnerships We Need; By President Barack Obama

The Partnerships We Need; By President Barack Obama


As the U.S. Embassy in Belize shares President Obama’s observances on the tenth anniversary of the terrorist attacks of September 11, 2001 which appear below, we would like to make special remembrance of Mr. Walwyn Wellington Stuart, Jr. and Ms. Alva Cynthia Jeffries Sanchez, two Belizean-Americans who were victims of 9-11, and extend our condolences to their families.

In observance of the tenth anniversary of September 11, President Barack Obama issued the following Opinion Editorial:

On this 10th anniversary of the terrorist attacks of September 11th, 2001, we remember that 9/11 was not only an attack on the United States it was an attack on the world and on the humanity and hopes that we share.

We remember that among the nearly 3,000 innocent people lost that day were hundreds of citizens from more than 90 nations. They were men and women, young and old, of many races and faiths. On this solemn anniversary we join with their families and nations in honoring their memory.

We remember with gratitude how ten years ago the world came together as one. Around the globe, entire cities came to a standstill for moments of silence. People offered their prayers in churches, mosques, synagogues and other places of worship. And those of us in the United States will never forget how people in every corner of the world stood with us in solidarity in candlelight vigils and among the seas of flowers placed at our embassies. 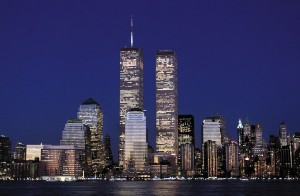 Views of the New York skyline before September 11, 2001

We remember that in the weeks after 9/11, we acted as an international community. As part of a broad coalition, we drove al Qaeda from its training camps in Afghanistan, toppled the Taliban, and gave the Afghan people a chance to live free from terror. However, the years that followed were difficult and the spirit of global partnership we felt after 9/11 frayed.

As President, I’ve worked to renew the global cooperation we need to meet the full breadth of global challenges that we face. Through a new era of engagement, we’ve forged partnerships with nations and peoples based on mutual interest and mutual respect.

Views of the New York skyline after September 11, 2001

As an international community, we have shown that terrorists are no match for the strength and resilience of our citizens. I’ve made it clear that the United States is not and never will be at war with Islam. Rather, with allies and partners we are united against al Qaeda, which has attacked dozens of countries and killed tens of thousands of innocent men, women and children—the vast majority of them Muslims. This week, we remember all the victims of al Qaeda and the courage and resilience with which their families and fellow citizens have persevered, from the Middle East to Europe, from Africa to Asia.

Working together, we have disrupted al Qaeda plots, eliminated Osama bin Laden and much of his leadership, and put al Qaeda on the path to defeat. Meanwhile, people across the Middle East and North Africa are showing that the surest path to justice and dignity is the moral force of nonviolence, not mindless terrorism and violence. It is clear that violent extremists are being left behind and that the future belongs to those who want to build, not destroy.

To nations and people seeking a future of peace and prosperity—you have a partner in the United States. For even as we confront economic challenges at home, the United States will continue to play a unique leadership role in the world. As we remove the rest of our troops from Iraq and transfer responsibility in Afghanistan, we will support Iraqis and Afghans in their efforts to deliver security and opportunity for their people. In the Arab world and beyond, we will stand up for the dignity and universal rights of all human beings.

Around the world, we will continue the hard work of pursuing peace, promoting the development that lifts people from poverty, and advancing the food security, health and good governance that unleashes the potential of citizens and societies.

At the same time, we have recommitted ourselves to living our values at home. As a nation of immigrants, the United States welcomes people from every country and culture. These newest Americans—like all the innocent victims we lost ten years ago—remind us that despite any differences of race or ethnicity, background or belief, we are all bound together by the common hope that we can make the world a better place for this and future generations. That must be the legacy of those we have lost.

Those who attacked us on 9/11 wanted to drive a wedge between the United States and the world. They failed. On this 10th anniversary, we are united with our friends and partners in remembering all those we have lost in this struggle. In their memory, we reaffirm the spirit of partnership and mutual respect that we need to realize a world where all people live in dignity, freedom and peace.