San Mateo continues to be neglected


According to the last census figures, the San Mateo Subdivision has an estimated population of 569. The area sits within Belize’s number-one tourism destination, San Pedro, Ambergris Caye, and yet it is one of the poorest and badly planned subdivisions in the entire country. The San Mateo area lacks proper water service, adequate road infrastructure and sufficient energy distribution. Built within mangrove swamps, the garbage laden landfill materials used to create islands of land and improper waste disposal poses a very serious health hazard. Environmentalists believe that because of the way people have been going about filling their land and disposing of their waste, the area may well be a “catastrophe in waiting.”

With the population of the island rapidly growing, so are the demands for affordable house lots by local residents. For the hardworking class; obtaining any piece of property is a dream come true. It is not uncommon in Belize that during election time property lots are distributed to electorates and such was the case with the lots in the San Mateo area. For many less-fortunate residents, this gesture provided a good opportunity to build and live instead of paying high house rents. But, instead of serving a good purpose, this so-called opportunity has instead created what many refer to as a “nightmare” than can well cause San Pedro its tourism industry. Adding to that is the fact that many who hold public office have turned a blind eye on San Mateo. In fact you will be surprised to know that many residents in San Pedro, many in public office and even policy makers have never even been to and don’t even know the truth about San Mateo.

Yes, there is a San Mateo; 289 males and 280 females living in an inhumane, unhealthy environment and most living in poorly constructed shacks erected over garbage filled lots or swamp. So desperate are these people that they use pieces of rusty old refrigerators, stoves, microwaves, bags filled with garbage and even old tires provided by the Town Council to add to the landfill and street material. Feces seep from the inadequately built septic systems or come from outdoor latrines that hang over the open swamp, literally dumping human waste directly into the waters many must wade through at times. Combined with the odor of decomposing garbage and feces that create a putrid stench is the high infestation of mosquitoes and other insects caused by stagnant freshwater collected by open old containers used as landfills. Large rodents and raccoons dig into the rotten debris attracting snakes in the area and crocodiles reside under swampy homes.

Adding to the health hazard is the misery of having to live without proper infrastructure. One single, narrow road wiggles from the entrance of San Mateo to the lagoon; a street that was built with the effort of area residents and a group of US Nationals who saw the misery of the residents. Old wooden “London Bridges” constructed of decaying scrap wood lead suspended pathways over the swamp, for as far as the eye, providing the only access to homes. The conditions are so bad that during the rainy season many residents carry along an extra change of clothes fairing that they either fall off the narrow stretch of lumber into the contaminated swamp or get wet on their way to work due to the rise in water level. Running water is limited and for those who have, it’s a luxury because San Mateo residents pay .55 cents per gallon compared to the .05 cent per gallon in other parts of the island and country. Electricity is not available and where it is, wires stretch for as far as you can see, adding a fire hazard as well as electrocution in the area.

Already living in poverty, like the rest of the island, there are many children in the San Mateo area who cannot afford an education. With the public schools overpopulated, the only other choice is enrolling in a private institution, something unaffordable to some of the area residents, while others attend the Holy Cross Anglican School which is filled to capacity.
But what has been done to improve the living conditions of the San Mateo residents? Most area residents would say “nothing.” Nothing much has changed through the years in the San Mateo area except that the population is growing and with it more poorly built structures going up all with the similar conditions. Most residents say that the only time they are remembered is during election time. But once elections have come and gone, San Mateo is given no priority, allowing the problems faced by the community to grow. Residents claim that the politicians from both parties have acted as if San Mateo does not exist, always avoiding bring the community to the light. Other residents claim that the Town Council officials prefer to avoid the issues of San Mateo for fear that it may put a “black eye” on the tourism-dependent island. Meanwhile San Mateo is being ignored to protect the good name of “La Isla Bonita” while more than 569 people continue living in deplorable conditions without a champion. 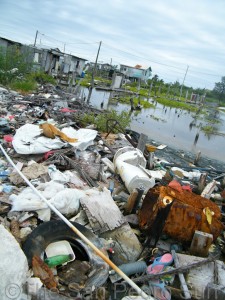 Ambergris Caye is the prime tourism destination in Belize, but in its backyard also sits one of the poorest neighborhoods in the country. It’s a community that if continued to be ignored and allowed to grow along with its problems, is destine for disaster. It doesn’t take a scientist to tell you that a health problem is waiting like a time bomb to go off. It is not far fetched to imagine a Cholera epidemic, which is transmitted primarily due to fecal contamination of food and water due to poor sanitation that could claim the health of the residents while costing Ambergris Caye our tourism industry. The solution to San Mateo is costly and will require a lot of money to address the many issues that was allowed to grow with the community. The money to fix the problem may very well be obtained from the taxes generated from this island.

The facts are clear. San Pedro continues to generate a large chunk of the country’s economy, so then in all fairness to the island, policy makers should budget the necessary monies to address critical issues that will ensure the sustainability and survival of the same tourism industry that feeds the government coffers. Past and current governments have developed comprehensive poverty alleviation projects to address similar situations, such as in a section of Southside Belize City; the same should be done for the people of San Mateo. Until we hold our policy makers and those that control government coffers responsible for the neglect of San Mateo, the issues will continue to be ignored. Even if policy makers and elected parliamentarians continue neglecting San Mateo, it is the duty of the local authority to champion the causes of the very people that elect them to office. Our local authorities should be able to right proposals for projects and apply for funding to international organizations that addresses problems similar to that of San Mateo. After all, San Mateo is a part of San Pedro and what their needs are is also the needs of the island; what affects them will trickle down to the entire island. But until their causes are championed, San Mateo residents will continue to be neglected and remain “a disaster waiting to happen”.