On Saturday December 3rd on the deck of the Pineapple’s restaurant at Ramon’s Village, long time diver and community icon, Mr. Ramon Nuñez was presented with the International Legends of Diving’s Giant Stride award.

The award recognizes Nuñez’s contributions to the world of diving. Ramon Nuñez’s life story tells of his birth on a sailboat at sea on June 12, 1940. His passion for the sea was apparent at an early age. He attended school and finished the eighth grade before he left school to start his life at sea. Through the assistance of friend Jerry McDermott, Nuñez was sent to Houston, Texas USA where he was dive-certified at the Ocean Corporation.

According to Nuñez, he had already been diving prior to becoming certified therefore when he went to receive his diving course he already knew the basic fundamentals of diving. It was no surprise when he graduating at the top of his class.

In 1972, Nuñez was contracted by the Government of Belize, as the only certified native diver in the country, to guide internationally known, Jacques Cousteau during his visit to the country. He would guide Cousteau to the Blue Hole as well as to the cavern under Caye Caulker. According to Nuñez, “This was the experience of a lifetime!

Dr. Jose Jones stated, “Ramon Nuñez’s achievements in the world of diving are indeed impressive: from being the first native of Belize to become a certified diver, to the honor of guiding Cousteau’s expedition into the world famous Blue Hole, he has certainly earned a place among the legends of diving”. 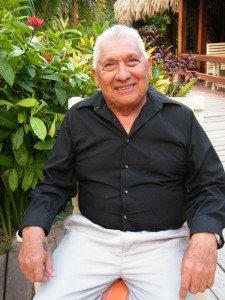 In speaking of his award, Nuñez stated; “I was so excited that last night I couldn’t even sleep. I was so excited about getting this award. It is the biggest thing that ever happened in my life. I had a lot of awards, but this is the biggest one, I feel so good. I think it pays to be a good diver. I dove in my life for 30 years and I still dive. This is great. Belize is one of the best places in the world to dive. We have so much different types of diving. There’s the great Blue Hole, wall diving, cannon diving, cave diving. I have been passionate about diving since I was a child. I love to dive. I dove 80 feet free diving for a living, when I was fishing for lobster. I encourage all divers in the country to keep diving because it is beautiful.”

Following the presentation of the Giant Stride award, by Dr. Jose Jones, who is a legend in diving himself, Nuñez took to the stand and spoke of his experiences after which special invited guest, Mr. Angel Nuñez said a few words.

Invited guests, family members and members of the media snacked on a buffet of finger foods and complimentary drinks thorough-out the evening. The San Pedro Sun congratulates Mr. Ramon Nuñez on his very prestigious award.