US Cat Catcher Volunteers at SAGA 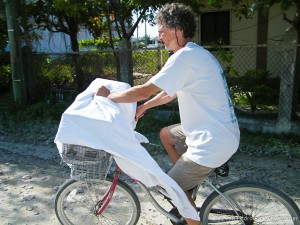 You might have seen him on a bicycle, carrying around a cage or even with trapped wild cats; he is Johnny Woodward from Salt Lake City, Utah volunteering at the SAGA Humane Society in San Pedro Town. Woodward has been on Ambergris Caye for the past three weeks, catching wild cats in various parts of the island in an effort to have them neutered, vaccinated and then released.

According to Woodward, the number of cats on the island far exceeds the demands for pet owners. So when Woodward was looking for a place to conduct some volunteer work, he was recommended to come to Belize and work with SAGA to help with feline population control. Woodward works with Best Friend Animal Society in Salt Lake City in the Trap, Neutered and Return Program where he does wild animal population control for the society. Because during the winter it is challenging to conduct such type of work, Woodward wanted to do similar population control volunteer work in a warm climate. Through a friend, he got in contact with SAGA where he was welcomed and has been volunteering of his service.

All the cats, about 29, have been trapped using humane traps with fasten bait, neutered, vaccinated and then released back into the community since SAGA cannot accommodate the wild cats. While stray cats are found all over the island, Woodward concentrated his efforts around the Boca del Rio Area.

Woodward said that since San Pedro is a small island, it’s a contained environment for the animals, which means that with some efforts from the residents, the nuisance caused by stray animals can be brought under control. ‘It does require that those who are concern donate funding because SAGA does not have government funding. It depends on donations and it requires the community to recognize that there is something going on with these stray animals,” said Woodward who ended by explaining that he was happy to have been able to volunteer his time in Belize.