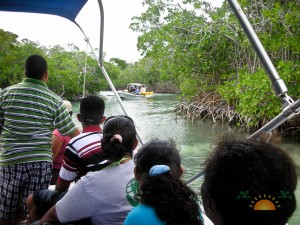 San Pedro has seen various incidents in the past months where boating accidents have left individuals limbless or injured. Sadly, these accidents could have been avoided if the cause for them had not been speeding. In response, the San Pedro Town Council (SPTC), San Pedro Tourist Guide Association (SPTGA) and the Belize Port Authority are working hand in hand, to prevent these incidents from occurring again.

The entire coast line of Ambergris Caye is deemed a No Wake Zone, meaning that boaters by law are required to slow down to the point of “idle” speed while in that zone. This is, of course a law to maintain safety and prevent accidents.

In a meeting earlier this week, all entities gathered to discus a main area of concern, the Sir Barry Bowen Bridge and the Boca Del Rio swimming area, which we are now being informed is a “NO” swimming area.

San Pedro Town Mayor, Danny Nuñez informed, “The river I had mentioned before that we are asking all boat operators and tour guides to go at a slow, idle speed so that we can protect the bridge and for the safety of the kids swimming in that same area. The Port Authority will be putting signs up as well, two in the back area, two in the front, and two on the sea wall concerning the safety of swimming in that area. This area is very dangerous; however the kids as well as the general public have been using it as a popular swimming area, due of the white sand that has over-flown from the improperly placed geo-tubes. Our objective is to divert swimming from the river area to the front where it would be safer to swim.”

Billy Leslie, president of the San Pedro Tourist Guide Association added, “One of the most important factors of what’s coming out of this is that if we do not alert and notify the general public then that’s when problems happen. It is more of an education program where we place these signs out there so that the public themselves can be aware that swimming in this location is dangerous so we prevent having a problem and not having to deal with somebody being hit. So the signs are an important part of informing the public that certain areas should not be used for swimming; we are ensuring that guides and boat operators know that they have to travel slowly in this area. It’s education to prevent problems from happening. Then we don’t even need of policing.”

The area being addressed is the Boca del Rio channel that separates north Ambergris Caye from San Pedro and is crossed by the Sir Barry Bowen Bridge. As specified by Mr. Leslie, this area has become a favorite swimming area for many residents of San Pedro and serves as a weekend picnic area for many families. However, while the soft sand does make for a very nice swimming area, it is adjacent to where boats are constantly passing while entering or exiting the Boca del Rio channel. Here is where the problem lies. Signs will be placed along the sea wall, discouraging swimming and encouraging compliance by boaters to the No Wake Zone laws.

Mayor Danny continued; “We will provide an area for swimming which will be further out in front on the beach area so that you don’t have boaters and people at the same place. Swimming areas will carry buoys and markers. Based on my experience in the past, I have seen that people do get the message. When we started putting the No Wake signs and Keep Right, it worked.  However, natural disasters, hurricanes and storms and so forth came by and took them so we’re going to put them back.”

The SPTGA and the SPTC and the Port Authority have also pledged to ensure that signs are placed along the coast line so that people are educated to the dangers of swimming in unsafe areas to further prevent boating accidents.

Michael Jenkins, Hydrographer and Port State Controller for the Belize Port Authority commented, “The rule applies to the entire river and the coastline. The laws are there, we will just start to enforce the law. The manpower – we have sufficient resources to get the job started and get the message out and to educate the public on what needs to be done to keep the mariner safe. We will be working closely with Mr. Martinez, located here in San Pedro, to give him all the support he needs to make sure that we get the place safe.”

According to Port Authority the laws are in place, and violators will be dealt with according to the law. This is the first step in the education campaign, meeting with the media. Expect to see signs along the coast line, in the back lagoon and especially at the gas stations where mariners go to refuel. As for proper lighting on the sea, Mr. Jenkins informed that within the next couple months, things will begin to look brighter on the waters.

Editorial: It is time to stop pretending that all is well in San Pedro