Home » Community and Society » Health » SPTC, SAGA and SPAH to work together to humanely euthanize dogs

SPTC, SAGA and SPAH to work together to humanely euthanize dogs 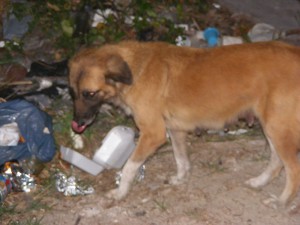 The San Pedro Town Council (SPTC), SAGA Humane Society and the San Pedro Animal Hospital (SPAH) have decided to work together in humanely euthanizing stray dogs on the island. The decision to work together was made during a meeting by the two organizations with Mayor of San Pedro Town Daniel Guerrero and his councilors. The meeting was as a direct result of a decision made by the council last week where 31 stray dogs were eradicated using strychnine.

Mayor Guerrero defended his position by saying that the decision taken by the council was because there was a number of issues arising from stray dogs in the community. The issues ranged from serious health concerns expressed by medical practitioners on the island as well as complains from both locals and tourist about dog feces found all over the island and the garbage scattered by these dogs. But even with the serious concerns being highlighted, the humane society adamantly objected to the method used by the SPTC. The SPTC used strychnine capsules, placed within pieces of meat, to introduce poison into the body of the stray dogs causing a slow and painful death. Both SAGA and SPAH took their plights to the SPTC proposing a more humane way of conducting the eradication.

Considering that the council had expressed that they would continue with the eradication of stray dogs, all three interested parties met on Monday July 16th to discuss the best possible and humane way forward to deal with the situation. Speaking to The San Pedro Sun, Mayor Guerrero expressed that better heads prevailed and a more humane way will be used to reach the same goal of eradicating stray dogs off the streets of Ambergris Caye. “We have decided to work together and we have set out a plan of action how we intend to eradicate stray animals in San Pedro. It will be done by SAGA and the San Pedro Animal Hospital with support from the council. We have given them some tasks to do. First they will go out and identify problematic areas and find out the amount of dogs that are problematic. Our goal is for us to eradicate 20 dogs per week until we can bring the number of stray dogs completely under control,” said Guerrero.

The Mayor explained that the success of humanely eradicating dogs depends on both organizations putting their long standing differences aside and work together in achieving the common goal. “We don’t want any chaos and so we have agreed to work together. If plan fails then the council will be forced to continue the way we have been doing it before,” said Guerrero.

While it is not certain what will be used, the dog will be injected with a standard poison that is currently used to put down ill/older animals at one of the two organizations. The method will cause a faster and more humane death.

In the short term, the two organizations are tasked with identifying problems areas and to find out the approximation as to the number of dogs that need to be removed off the streets. The goal is to remove at least 20 problematic animals off the streets per week. Once the dogs are rounded up, they will be held for at least three days to see if anyone will claim the animals. When animals are claimed, it is the hope that owners will allow the SPAH to spay or neuter the animals before returning them after he/she has paid a fine for allowing the dog to run astray. In the event that the animal is not claimed and cannot be held at the facility or adopted after three days, then the dog will be euthanized humanely.

In the long term, all parties intend to conduct a vigorous educational campaign to educate the public on ways to deal with pets. It is also the hope of all three parties to enforce the Dog Act, under the Laws of Belize, that will minimize the problems associated with owning a pet on the island.

While it will cost about $15 to humanely euthanize a dog after holding them for a period of three days, the SPTC says that they are yet to agree on who will be footing the bill. That will be determined in a meeting scheduled for early August. The SPTC did agree however to assist in roundups as well as disposing of the animal carcasses. The Mayor hopes that by the first week in August the plan should be put into action.