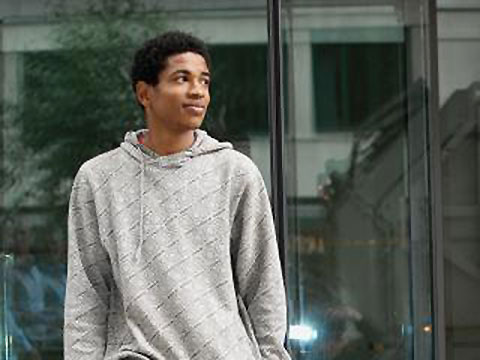 A former Big Issue vendor has described carrying the Olympic torch as “the proudest day of my life”.

On Saturday, Joel Hodgson bore the flame along the streets of Newham, east London, whilst thousands of people cheered him on.

His involvement in the Olympic torch relay comes after an astonishing two years in which Joel escaped homelessness and set himself on a path to sporting glory as well as professional success.

Joel now holds a full-time job with an international law firm and is set to represent Belize, his home country, in the 100m at the 2014 Commonwealth Games.

After passing on the torch at 11 o’clock on Saturday morning, Joel went to a star-studded event at Newham Town Hall, where he was congratulated by the singer Paloma Faith.

Joel, 25, said: “It was an amazing feeling to know that I was the only person in the world at that moment to be running with the torch. All my family and friends came to watch, which was great. It really was the proudest day of my life.”

Joel was abandoned by his mother at just three months old and spent his early childhood living in a children’s home in Belize. He was then adopted by Scottish parents aged four, along with his two sisters, and grew up in Renton, Dunbartonshire.

Joel moved to London four years ago with his girlfriend Michelle. But when she was assaulted on the estate they lived on, the police advised the couple not to go back to their home and they were forced into homelessness.

After sleeping on the steps of police stations or on cheap camp sites, Joel started to sell the Big Issue and his life changed almost overnight. With the help of our support staff, he landed a prestigious internship at Freshfields, an international law firm with offices in 28 countries.

After wowing colleagues with his work ethic, he was taken on as a full-time member of staff in the billing department.

Then, after being chosen to carry the Olympic Torch, Belize asked him to run the 100m race in the Glasgow 2014 Commonwealth Games, having seen a Times feature about his story. Joel now rents a flat in Enfield, north London, and his landlord was there on Saturday to cheer him on.

Joel added: “I have always dreamed of becoming a sportsman and now I have the opportunity, as long as I keep on training hard. Carrying the torch gave me renewed motivation to realize that dream.

“I have definitely turned my life around and I don’t think that would have happened without the help of the Big Issue.”

Tonight, Joel will join the Belize team in the Olympic stadium to hoist their country’s flag ahead of the official opening ceremony on Friday.