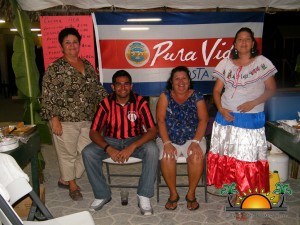 The official activity, which is a part of the island’s September Celebration Calendar of activities, was held on Saturday September 15th at the San Pedro Central Park. Earlier this month the SPTC had invited the Central American and Mexican communities to showcase their unique cuisine as part of their county’s culture. The celebration coincided with the 191st anniversary of the Independence Day of Guatemala, El Salvador, Honduras, Costa Rica and Nicaragua having obtained political freedom from Spain on September 15th 1821. In the case of Mexico, it celebrated its 202nd year of independence having obtained it on 16th of September 1810. 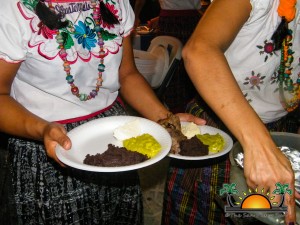 At the event, each country showcased the best of food, from the “pasteles de papas con salsa”, “chocolate caliente” and “pupusas” from El Salvador, the “arroz con pollo” and “ceviche de pescado” from Costa Rica to the “carne asado con frijol negro volteado con tortilla” of Guatemala. The Mexicans had their traditional “Tacos al Pastor” and “Tacos de res”. The flavors were many, and all were satisfying.

Speaking at the event was both Mayor Daniel Guerrero and Minister of Tourism and Culture Hon. Manuel Heredia Jr. They both explained that the event shows their commitment to work in unity with the Central American and Mexican communities for the betterment of the island. “This is an indication that our community and country opens its arms to embrace people from all walks of life, and we want to show them that they are an important part of our community,” said Mayor Guerrero. “During this month, we want to be able to provide you with the opportunity for you to showcase your culture with the rest of the island,” said Heredia. 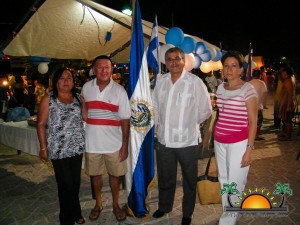 Special invited guest was Ambassador of El Salvador in Belize, His Excellency Rolando Roberto Brizuela Ramos. Speaking to The San Pedro Sun Ambassador Brizuela Ramos said that, “For us at the Embassy, this Central American Celebration is very important. This is one way we keep that communication between the Salvadoran community in San Pedro and the Embassy. This is one of the most organized Salvadoran Community in Belize. Tasting all the food here, I feel like I am in El Salvador.” Also accompanying Ambassador Brizuela Ramos was Salvadoran Tourism Consulate in Belize Graciela De Diaz. “I want to congratulate all Belizeans in general and the Salvadoran community in San Pedro who live harmoniously on the island and I want to encourage them to continue to work in the development of this community,” said Graciela de Diaz who explained that there are over 40 thousand Salvadorans/Belizeans living in Belize.

The event continued through the wee hours of Sunday and including the music of Rompe Raja.

On Sunday September 16th, the San Pedro PUP Executive Committee also honored the Central American and Mexican communities living in San Pedro with an all day beach party. The event included several activities such as a dance competition, beer drinking contest, bathing suit contest and karaoke competition. The event was held at the Boca del Rio Park and had the participation of Councilor Wally Nuñez.

Political Candidates weigh in on the Town Clock issue5 Photos