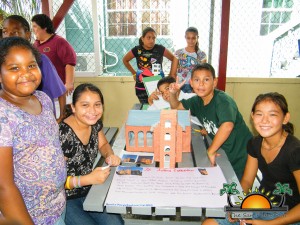 The Isla Bonita Elementary School concluded their patriotic events on October 5th with two competitions for the upper division classes. One was an individual poster competition and the other, a group competition highlighting the main national historical buildings in Belize. The competitions were held under the national celebration theme, “Many Faces, Many Dreams, One Goal; Celebrating Belize,” and was open to standard V and VI students.

In the poster competition, students were asked to come up with a poster that best portrayed the National September Celebration theme. A total of 27 students took part in the competition after which four entries were chosen as the best posters. First place went to Kai Nunez, second place to Nashley Badillo and third place was awarded to Gian Guerrero and Tyreek Arzu. 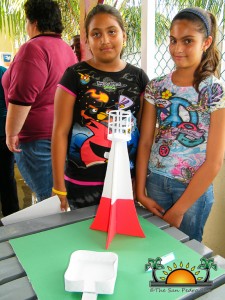 In the group competition, the students had to build a model of one of the many national historical buildings in Belize. A total of eight groups competed; some displaying the Phillip SW Goldson International Airport, others the Baron Bliss Lighthouse and tomb and others the Karl Heusner Memorial Hospital (KHMH) among others. At the end of the judging, the Standard VI group of Shannon Nuñez, Gian Guerrero and Martha Lisa Vasquez won first place with their model of the Belize House of Culture – formerly the Governor’s House. Second place went to the Standard V group of Beatrice Ramirez, Kaiya Cabral, Zoe Canon and Allen Ek with their model of the St John’s Anglican Cathedral, the only standing Cathedral in Central America that was built by slaves over 200 years ago. Third place went to another standard V class comprising of Diego Sanchez, Jessica Perez and Christopher Rivero with their model of the Baron Bliss Lighthouse and Tomb built in honor of Belize’s greatest benefactor, Henry Edward Ernest Victor ‘Baron Bliss’.

Winners in both competitions were given books and other stationery provided by the school.