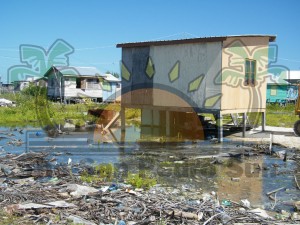 Considered a neighborhood in need, San Mateo today received a boost from a business based in Belize City. The San Pedro Town Council (SPTC) received a substantial donation of US $50,000 dollars to be used to upgrade the infrastructure in the San Mateo area of San Pedro Town. The donation was made by representatives of Bay Trust International in Belize. The handing over of the check was made on Friday October 26th in the heart of the San Mateo Area and at hand to receive it were members of the SPTC and the Area Representative of Belize Rural South Manuel Heredia Jr.

Glen Wilson of Bay Trust International Limited in Belize, who was on hand to deliver the donation, stated to The San Pedro Sun that after learning about the living conditions in San Mateo it was decided to designated the donation to the people of that area. “I was talking sometime ago to several people that live in San Mateo and people who know about the condition of the people in San Mateo. I said to them, is there anything I can do? I spoke to my fellow directors and we agreed that we should make a significant donation to the town council to help the people of San Mateo. The people don’t have proper roads and without roads they can’t get water, they can’t get electricity into the area” said Wilson. Speaking of the condition of San Mateo, Wilson said “I think this is not the image we want to present to the world about Ambergris Caye. It is where people live because they need to live and they need housing. It is a good area once you can drain it and get the infrastructure that is needed… I think people need help and I think if one person makes a gesture like we did then others are going to follow.”

After receiving the donation, the Mayor of San Pedro Town Daniel Guerrero expressed words of gratitude to Wilson and Bay Trust 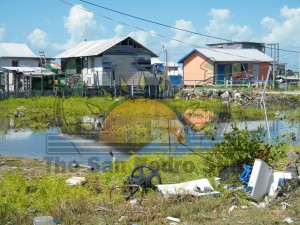 International Limited on behalf of the residents of the island and specifically the people of San Mateo. “This money will be used strictly for materials. He has seen how people live in San Mateo and it has touched his heart,” said Mayor Guerrero. Once materials are purchased, the SPTC will contribute labor for the upgrading and opening of new streets in the San Mateo area.

San Mateo is considered one of the poorest areas in the entire country and while it has been neglected for a very long time, Heredia said there will be more focus from both local and national governments. “We have never actually completely neglected San Mateo. We have so much resource and we try to use it to the best. At the cabinet level, the issues of San Mateo are brought up constantly… It is our aim that we will be focusing a lot harder in San Mateo in the next few years so that San Mateo can become the most beautiful area in the outskirts of San Pedro Town,” said Heredia.

Both Heredia and Guerrero explained that it is their hope to start the electrification and water distribution projects for San Mateo before the end of the year. Already the SPTC has received a commitment from United Nations Children’s Fund (UNICEF) who is expected to be making a visit to the area on October 29th.