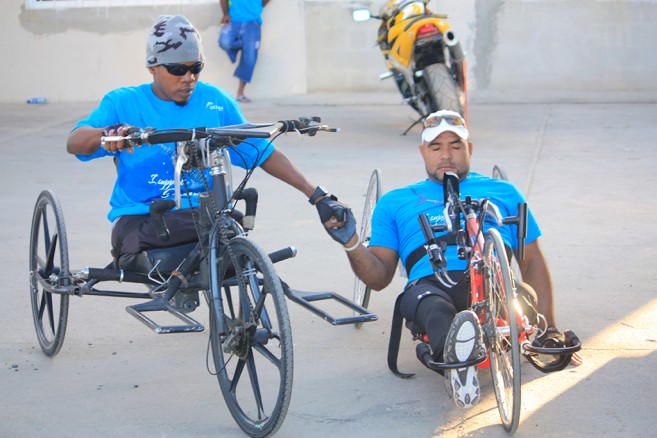 “I thank Oceana for making this possible. Oceana’s sponsorship, along with the support of my family and so many others, allowed Shaphan and me to today complete the ride across Belize here in Punta Gorda, to coincide with a special day for our Garifuna brothers,” said inspirational paraplegic Jerome Flores shortly before midday yesterday after Reef Ride 2012 culminated at the Central Park in Punta Gorda Town, Toledo District. Added fellow paraplegic Shaphan “Bala” Domingo, “I am so glad I was able to meet this challenge of riding a trike from Dangriga to Punta Gorda. Next stop: Rio, Brazil in 2016 at the Para Olympics!” 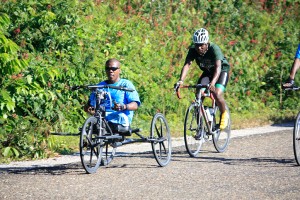 Reef Ride 2012, a 2-day event, left Dangriga on the morning of November 18th and that first leg of the ride ended in Independence, where the team rested for the final leg the following day. Joining Jerome and Shaphan, were 12 cyclists from the Belize Zoo, including its Director Sharon Matola. On day two, Jerome and Shaphan were accompanied all the way from Independence to Punta Gorda by Cyclist John Olivera. There were intermittent cyclists who joined the Ride along the way into Punta Gorda. Reef Ride 2012 was very much a family affair. Jerome’s Dad Samuel Flores, celebrated his 54th birthday by riding alongside his son almost the entire route. Jerome’s twin brother Jeremy, and his partner Gina, also rode. Damion Jones and Mitchell Bainton accompanied Shaphan. Other members of the Flores Family, including Jerome’s Mom Francine Flores, his partner Alexie Silva, Sister Monique, Nephew Caleb, and Cousin Esmeralda along with Oceana in Belize staff comprised the service team, which followed the riders to ensure their safety and that their other needs to complete the ride were attended to. Escort was provided by the Transport Departments of both Dangriga Town and Punta Gorda Town.
Jerome & Bala undertook Reef Ride 2012 to complete the last leg of a challenge Jerome started back in 2009 to ride a hand-powered trike across Belize. His primary aim, then as now: to bring awareness to the plight of people living with diverse abilities. Through its sponsorship this year and last, Oceana in Belize sought to lend its full support to Jerome’s mission even as its involvement bring attention of Oceana’s own campaign for a ban on offshore oil drilling due to its threat to Belize’s marine resource. Additionally, as the Reef Ride coincided with Garifuna Settlement Day, it served as a means for Oceana to salute our Garinagu compatriots as they celebrate their 1802 arrival to Belizean shores. 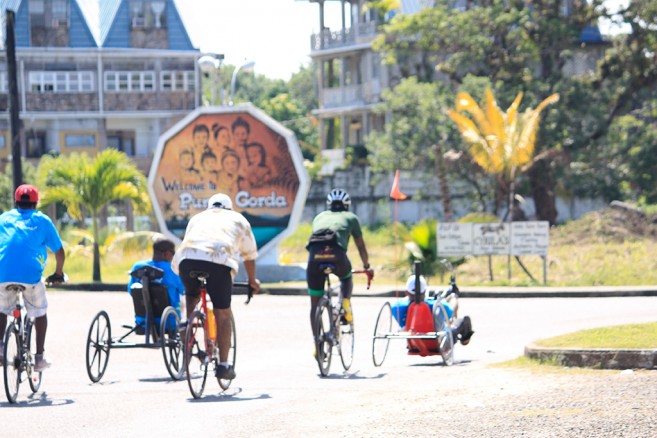 Last year Shaphan followed Jerome in the Oceana bus and committed to ride alongside Jerome this year if he got a trike. He did as Jerome was able to pass on to Shaphan the do-it-yourself trike he had used between 2009 & 2011. This year Jerome rode an Invacare professional trike donated to him through US-based Challenged Athletes Foundation.
Orange Walk Town based Mr. Adrian Camara, who had accompanied Jerome on earlier segments to the Ride, was again unable to participate this year due to health issues.
Beyond the Reef Ride, Jerome, Shaphan and their team hope to represent Belize at the 2016 Para-Olympics in Rio de Janeiro, Brazil, following the Summer Olympics. They also hope to be able of organize a series for fund-raising events in coming years where athletes in wheelchairs go up against others not so challenged.

SAGA: How to Be a Good Dog Owner and a Great Neighbour5 Photos