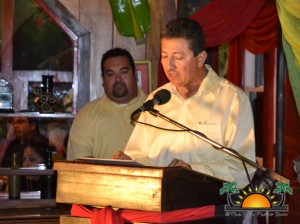 In 1984, November 27th to be exact, then-village chairman Gilberto “Chico” Gomez became the first Mayor of the newly declared municipality, San Pedro Town. 28 years later, we celebrate the anniversary of township, and the growth of the town on Ambergris Caye that began as a small fishing village only to become the country’s number one tourism destination.
In an evening set to honor those who have made great contributions to the town, Mayor Daniel Guerrero and his council hosted a dinner soiree for approximately 100 specially invited guests. Present at the event were the historic first group of councilors, their spouses, past Mayors, educators, health care workers and more. Held at Elvi’s Kitchen, the event was filled with speeches that 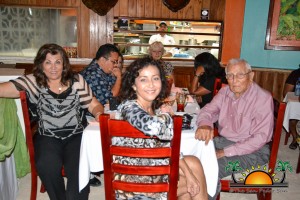 reminisced of the early days of township, and an observation of its growth through the hard work and determination of those who have been Mayors and Councilors, leaders and challengers.
There was a special video presentation of the first mayor Chico Gomez, who was ill and could not attend the special evening. During his interview with Eiden Salazar of Reef Radio/Reef TV, Gomez spoke of the encouragement he received during the process of becoming a town. An interesting fact to note was that during the first year of township, there was no salary. Thereafter, the Mayor and Councilors received approximately $40 a month! He took the opportunity to encourage current leaders to listen to their people, to work hand in hand with each other to ensure that, at the end of the day, San Pedro Town benefits. 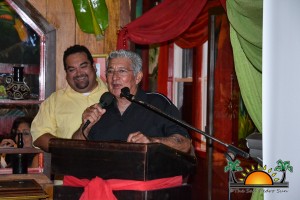 Mayor Daniel ‘Danny’ Guerrero expressed his thanks and admiration to those present, pledging to continue the hard work that will benefit the town and its people. Mayor Guerrero has been hard at work alongside his council bringing about positive changes to different areas around town, and he credited his commitment as a lesson he took from observing past leaders. He reiterated that he is open to advice and suggestions, welcoming input into the well-being of the town and island.
Special guest speaker Angel Nuñez shared his memories of San Pedro Town, declaring the gathering that night as the “elite”, those who have contributed much to the growth of the town. To honor and acknowledge those very contributors, a special awards ceremony saw the handing out of plaques to a number of people, including long-serving teachers, nurses, doctors, media personnel and San Pedro Town Council employees (18 years of service!). Even The San Pedro Sun was recognized for its years of “keeping San Pedro Town accurately 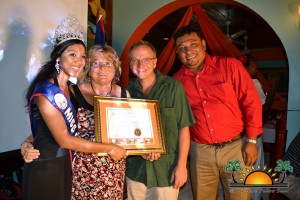 informed as well as promoting the island both nationally and internationally.”
Editor Tamara Sniffin was surprised to receive the plaque. “It was an honor to be recognized as a part of this community, and to know that our efforts have not gone unnoticed,” she said. “It was a lovely evening and a great opportunity to visit with other community members while enjoying inspiring speeches. It was fun to walk down memory lane, while surrounded by some of the very people who brought San Pedro to Township. Of course, dinner was delicious too!”
Indeed, after the pomp and circumstance, a delicious buffet spread prepared by Chef Jennie Staines awaited attendees. A very fitting ending to a wonderful evening celebrating San Pedro Town. Long live San Pedro Town; happy 28th Township anniversary! ¡Que viva San Pedro! ¡FelizAniversario de Municipalidad!