« Older: Do we speak, or hide the truth?
Newer: » “Poly Dolly” helps raise funds for the Polyclinic 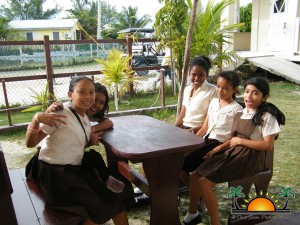 The Mayor and Councilor Gabriel Nuñez first visited the New Horizon SDA primary school. There they delivered seven medium sized tables that can accommodate four persons, two small tables that accommodate two persons each and one large table that can accommodate six persons. According to Mayor Guerrero, the donation was given to the SPTC by Elvi’s Kitchen to donate to any school of the council’s choice. As such, Mayor Guerrero said that he took into consideration two of the largest primary schools.

According to the Principal of New Horizon SDA Miguel Hernandez, the donation is appreciated, as the tables will help the school to accommodate students who have lunch on the school grounds. Hernandez hopes that eventually the picnic tables will be placed under the gazebo they will erect from the proceeds of the annual harvest event that took place on Sunday, November 24th.

Both Mayor Guerrero and Principal Hernandez explained to The San Pedro Sun that in addition to the picnic tables, the school is preparing to start construction on two new classrooms which they hope will start in December. Funding for the two new classrooms is being secured from an anonymous foreign donor. Mayor Guerrero said that he is also looking to secure funding for additional classrooms that will compliment the two that will be constructed.

Meanwhile five picnic tables, a large and four medium sizes, have been sent to SPRC that the council hopes will benefit the students that also remain on campus during the lunch break. The SPTC also received other donations such as lights and fans from Elvi’s Kitchen which the council says will be distributed to the schools most in need on Ambergris Caye.