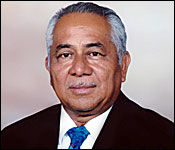 Just as the Belize National Teachers Union (BNTU) was set to hold a national protest in Belmopan to demand a raise in salary, they also prepared to lay to rest one of their most powerful former presidents. John Pinelo, one of the BNTU’s longest serving presidents, passed away on Saturday January 26th after losing his battle to cancer. He was buried in his home town San Ignacio Town on Wednesday January 30th. The 64 year old former teacher-activist leaves behind a legacy, having led the country’s most influential union in some of its biggest protests in recent memory.

Pinelo taught in various high schools across the country and went up the ranks in his teaching profession, eventually becoming the teachers union’s president in 1984, leading it for 19 years up to 2003. He then continued to be an active member until 2012. His genuine concern for his fellow teachers, as well as his humble personality, kept him in touch with the reality in Belize, championing the causes alongside his friend George Frazer, also a unionist, for years.

Along with Frazer, Pinelo led the BNTU and the National Trade Union Congress of Belize (NTUCB) in the 1995 protest against Manuel Esquivel and his government. Back then it was to protest the International Monetary Fund proposal which sought to retrench public servants by the hundreds. That year, close to 1000 public servants lost their jobs and in front of the protest line was Pinelo, joining his union members. Most recently Pinelo also led the teachers and was vital in galvanizing support from other members of the NTUCB to lead the 2005 protest across Belize and the two massive protests in Belmopan in the latter part of 2005 against the Said Musa government to reject a proposed tax increase. His final, and one of the largest demonstrations against the government, was the 2012 protest against the Education and Training Bill. The Bill sought to remove corporal punishment from primary and secondary schools across the country. Over two thousand teachers gathered at Independence Hill led by Pinelo.

The well respected educator and unionist was honored by Her Majesty in April of 2004 when he was named a Member of the British Empire (MBE). Through his great offering to the betterment of this country, Pinelo will be remembered as a man of honor and integrity.

John Pinelo is the father of Dr. Noeli Pinelo-Nicholson, community doctor at The San Pedro Dr. Otto Rodriguez PolyClinic II. The San Pedro Sun joins the general public in offering sincerest condolences to Dr. Pinelo-Nicholson and the Pinelo family, friends, and fellow teachers/unionists. May he rest in peace.