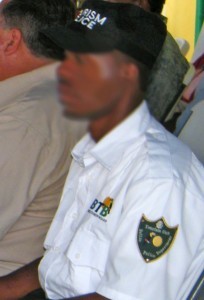 The San Pedro Police Station Tourism Unit has lost four policemen in that department. The four officers are Special Constables Dean Dawson, Ian Wagner, Shedrack Dominguez and Donicio Sanchez. Their sudden departure from the department is a result of internal problems within the tourism unit. The confirmation was made by the Officer Commanding San Pedro Police Formation Superintendent of Police Luis Castellanos.

Assistant Superintendent of Police (ASP) Diane Hall also confirmed that the officers had resigned but would not state the purposes of the resignation. However, according to the officers, the reasons for their resignation have to do with salary, unpaid Social Security Contribution, welfare and other benefits.

In an interview with The San Pedro Sun, Ian Wagner said that the tourism police officers employed under the Belize Tourism Board (BTB) have been treated with much disrespect and no regard for their living situations. “They at the BTB treated us like garbage that is at the bottom of the garbage can. Ever since we have worked under BTB they look on us like nothing. We have gone through whoever and everyone to have our concerns addressed so that they can understand what we are going through, and there was no one to listen to us,” said Wagner as he outlined the unit’s frustration in trying to get the attention of the upper hierarchy at BTB.

Wagner said that the tourism police officers fall under BTB through the Government Workers Regulation (GWR) and are regarded as non-established open vote workers. He added that they are employed at a minimum salary of $500 fortnightly (every two weeks) but after social security contribution is deducted, they receive $487. The officers also get $175 monthly as a minimum contribution as part of the hardship and maritime allowance through the police department towards rent and utilities.

What is even worse said Wagner is that officers had been silently angry that social security contributions are not been paid on their behalf, even though it had been deducted from their salary. He was able to confirm it when he was denied benefits after his child was born. “I had a little baby girl and I went through the Social Security Board (SSB). After I completed all my paper transactions and I went over to the Social Security Board, I was told that I could not collect my benefits. I asked why I could not collect my benefits and they (SSB) said that my current employers were not paying contribution on my behalf. I got upset because they have been deducting social security contribution from my salary every week since I began working three years ago,” he outlined.

While no one at the police department would officially confirm the claims vented by the officers, an Assistant Superintendent of Police and as well as a Corporal of Police within the Tourism Police Unit confirmed that indeed those are some of the challenges faced by the tourism officer. “They (BTB) appear as not concerned about the officers. They are not worried about the concern and welfare of these officers and it appears that nobody cares,” said the ASP.
Wagner said the matter was continuously brought to the attention of ASP Hall but clarified that she was “not the boss. She is just the supervisor for the unit.” ASP Hall said her responsibility is strictly coordination and supervision and has nothing to do with salary and benefits and explained that it is BTB that deals with those matters.

In a statement to The San Pedro Sun, Director of Tourism, Laura Esquivel-Frampton explained that “In regards to the resignation of four Special Constables in San Pedro, the Belize Tourism Board would like to assure that the resignations, to our knowledge, are not a result of any payment issues that the BTB has with the Constables. The BTB has been meeting with the Labour Department in San Pedro to ensure that all payments to them are up to date, where it relates to the BTB responsibility. To clarify, the BTB provides a stipend to Special Constables working with the Tourism Police Unit in an effort to increase the efficiencies of that unit. The BTB does not manage the Special Constables or the other police members of this unit. Any further payment issues are completely out of the control of the BTB and must be addressed with the Labour Department.”

The Tourism Unit of the Police Department is only managed by the police department but salaries are paid through the BTB.