On March 5th, news surged of a brutal act against a defenseless Black Howler Monkey by students of an Orange Walk District High School. The students accused of capturing and beating the monkey are alumni from The Belize High School of Agriculture in the San Lazaro Village. Students claimed that their professor had instructed them to kill the animal since it had urinated on him while he was taking a nap in the bushes. The students allegedly stoned the animal, causing severe internal damage and dragged it back to the school’s entrance to present it as a trophy to their peers. 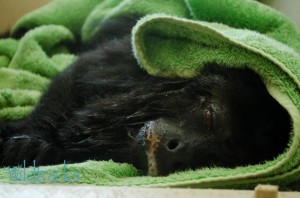 n March 6th, the Howler Monkey was rescued by the Forest Department after a concerned individual contacted them. The Howler Monkey was transported to a veterinary clinic at Belize City where the animal’s condition was stabilized. The Howler Monkey was later transported to Wild Tracks Rehabilitation Center for Manatees and Primates in the Corozal District to receive further treatment. Upon being examined, it was noticed that the animal had no broken bones but had suffered severe head trauma, as well,one of its eyes had been damaged beyond repair. The animal experienced several seizures while in the care of Wild Tracks and although much effort was put into nourishing the monkey back to health, it succumbed to its injuries two days later on March 8th.

The Black Howler Monkey is an endangered species and is protected under the Wildlife Protection Act (Chapter 220 revised edition 2000) and the Forest Act (Chapter 213 revised edition 2000) of the substantive laws of Belize. The Belize Forest Department (BFD) launched an immediate investigation into the incident. In a press release issued by BFD the following was stated, “The Forest Department does not take the incident lightly and will be laying charges against the offenders. Such cruelty is appalling and will not be tolerated.” The outrage of the incident also led The Belize Tourism Industry Association, Orange Walk Branch to issue a press release expressing the severity of the incident and how acts such as this should not be tolerated, and even more disturbing is that it was done by students at an education facility.

Investigations were not only conducted by The BFD but also by The Ministry of Education. The fact that the act was committed by students under the influence of a teacher raises concerns on the administration of the institution. The Ministry appeals to schools across the country to introduce extra curricular activities for the student to raise awareness about endangered species and wildlife conservation in Belize. Wildlife is a very important aspect of the Belize Tourism Industry and should be nurtured and cared for.

Teacher Angel Carillo and three students of Belize High School of Agriculture in southern Orange Walk have been charged with Unlawful Hunting in the death of the Howler Monkey in charges brought forward by the Forest Department. Hunting, according to the laws regarding wildlife, is defined as the act of killing, molesting, taking or attempting to kill, take and/or molest any species of wildlife by any method. The group is expected to be arraigned in the Orange Walk Magistrate’s Court by Monday, March 25th, 2012. The maximum penalty is one thousand dollars or six months imprisonment.