Lions from all across the country convened in San Estevan Village in the Orange Walk District for the annual Zone 59 Lions Convention. The convention was hosted by the San Estevan Lions Club from Friday April 19th to Sunday April 21, 2013, under the theme, “Lions-Serving and Embracing the Future through the Winds of Change”. 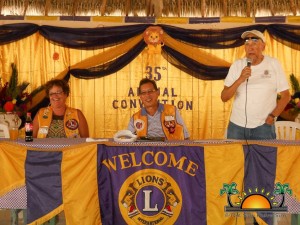 The convention activities included the formal opening ceremony on Friday night with invited guest speaker Yolanda Gomez, General Manager of the La Immaculada Credit Union. In her remarks, Gomez spoke of the importance of service organizations and their contributions to the community. Following the opening ceremony visitors and Lion members got the opportunity to visit the various hospitality booths. At the various booths, a variety of tasty food and drinks were enjoyed and plenty of giveaways were to be had. 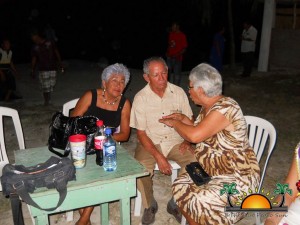 On Saturday April 20th, members of the wider community of the Orange Walk District and the general public were invited to attend and participate in a seminar, held under the theme “Understanding/Nurturing Our Belizean Youth”.  The event had presentations of Psychologist Dr. Elma Augustine and counselor Abdul Nunez.  A youth leader and a youth also spoke at the event. Following the presentations, the panel engaged with the audience in an open discussion. It is expected that as a result of the seminar, recommendations will be drafted and forwarded to the Prime Minister Honorable Dean Barrow, the Leader of the Opposition Honorable Francis Fonseca and other relevant persons on the issues discussed.

In the afternoon, the Lions were involved in a community project where they painted the tree trunks at the San Estevan Nature Park. Later in the evening, the Lions got the opportunity to enjoy cultural presentations by the different Lions Clubs and Lions Club Queens. The evening was highlighted by the crowning of the new Queen of Belize Lions Zone 59, Kimberly Hernandez of San Estevan Village. 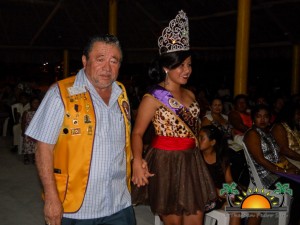 On Sunday April 21st, the Lions attended a church service at the San Estevan Roman Catholic Church. Following the service, the traditional Lions parade and floats went through the principal streets of San Estevan Village. The Convention ended with an award ceremony, in which San Pedro was awarded with second place in the parade category. 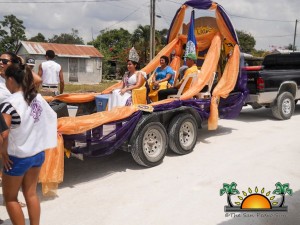 This year, the Lions of Belize celebrated 40 years of service in the country.  During these 40 years, Lion members throughout Belize have been involved not only in the traditional Lions projects of  eye conservation, but also in projects impacting youth, education, health, social issues, environment and other areas. Of recent, Lions in Belize are more involved in projects which target the problems affecting Belize.