Fire officials in the Orange Walk District have confirmed to The San Pedro Sun that at mid-afternoon today, May 16th a wild bush fire in Carmilita Village just outside of Orange Walk Town, Belize has consumed three structures on the John McAfee Estate. Officials are still on the scene battling the fire but it has been confirmed that two buildings and a thatch-roof gazebo has been consumed by the fire.

According to an eyewitness the fire started in the Toll-Bridge area and eventually made it to the property at about mid afternoon. “The buildings were totaled, everything was destroyed,” said a witness to The San Pedro Sun. According to the witness, her sister and other family members were living on the premises at the time of the fire but no one was injured.  Fire officials are still battling the wild fire after which they will be assessing the damages. 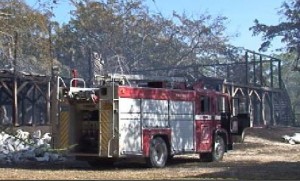 The 68 year old McAfee fled Belize in late 2012 after officials on Ambergris Caye wanted to question him for the shooting murder of his neighbor, 52 year old American national Gregory Faull. Faull was found murder with a single gunshot on Sunday, November 11, 2012.  McAfee eluded being questioned and fled to Guatemala, later seeking extradition to the US where he has been living ever since.

His riverside estate in Carmelita Village, which is currently listed for sale, is estimated at a value of US$3 million.