The Ministry of Health (MOH) has released the Tuberculosis, HIV/AIDS and other sexually transmitted infections (STI) program report for 2012. The statistical report is based on a series of studies implemented by both the National Aids Commission (NAC) and the MOH. 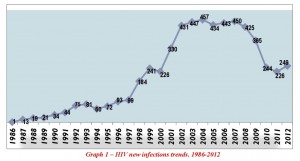 According to the report, two major studies were used to gather new digits for the 2012 statistical report. These studies are the Mesoamerican Project, which document the resistance to anti-retroviral medication in the Mesoamerican Region as well as studying many other variables with the biological samples collected, and the Behavioral Surveillance Study (BSS) which studied the two major populations believed to be at greater risk for HIV: female sex workers and men having intercourse with persons of the same sex. The studies were conducted by the Belize Health Information System and were done in conjunction with the Epidemiology Unit and with technological support from the Information Technology Department.

The studies revealed that in 2012 there were 84 cases of Tuberculosis reported countrywide, with the majority of cases (49%) concentrated in the Belize District. In comparison to the past two years, the total number of new infections demonstrates a decrease in the Corozal and Toledo Districts. A total of 35 Tuberculosis patients were recorded to be on treatment at the end of 2012, with eight having successfully completed the six month course of treatment with a further six being documented as cured. The reports also recorded 14 deaths due to Tuberculosis related infections.

Human immunodeficiency virus (HIV) has plagued the country for decades. It has been one of the core concentrations of studies in efforts to alleviate the problem and lower the numbers of infected persons. In 2012 there was a significant increase in the total number of HIV tests conducted countrywide when compared to 2011 data. The data also reported that more females are being tested than males, but that more males are turning out positive. The total figures in 2012 represent a 10% increase in the total number of reported new HIV infections when compared to 2011 data. This is of much significance as this is the first increase in the last four years as the trend had been showing decreasing numbers of new HIV infections.

Once again the Belize District recorded the highest number of new infections in 2012; the second highest statistics were reported by the Cayo District. Females got tested almost twice as many times as a male but the positive rate in females has actually decreased when compared to the 2011 data. The overall positivity rate has also shown a slight increase when compared to 2011 data, particularly as it relates to the male ratio. Therefore the results concluded that more males are being infected than females. In 2012 there were 88 recorded deaths due to HIV/AIDS, and 57 of those cases were males.

The issue of sexually transmitted infections remains widely uncategorized, mainly due to inadequate patient follow up and the fact that we rely solely on the syndromic approach to treatment. As a result of the statistics, MOH recommends that persons should get tested for HIV/AIDS at least twice a year, since early detection and treatment results in longer life. As well, persons are encouraged to have protected and safe sex. Persons tested positive for HIV/AIDS can receive free treatment at the public hospitals and clinics.