A few months ago, residents on Ambergris Caye began wondering of the origin of the painted flowers that popped throughout the island. Rebecca Coutant of  San Pedro Scoop took on the case, digging online in an effort to discover the elusive creator of this great mystery. Her investigative skills creamed the amateur sleuths who had tried to find out about the flowers, and The San Pedro Sun is happy to report that the flower images are the work of US artist Michael De Feo. The graffiti – with a positive message – is painted throughout international cities worldwide and has been De Feo’s work for over 20 years. 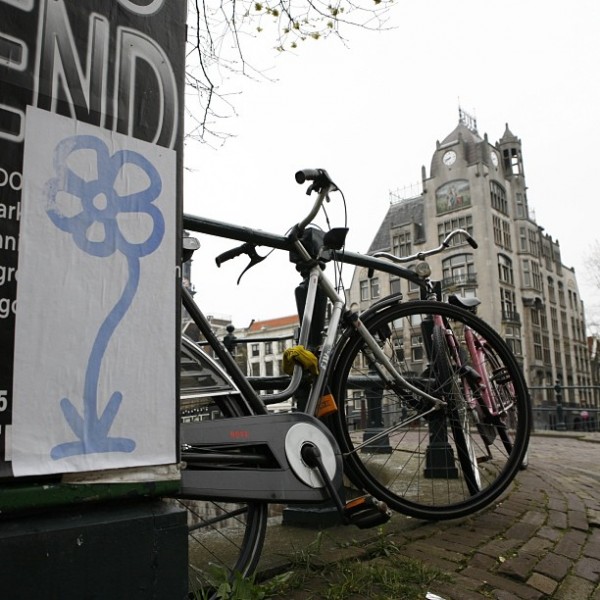 In an interview with The San Pedro Sun, De Feo explained the purpose of the flowers that has garnered him international attention. “They’re part of a worldwide street art project that I started over twenty years ago in New York. It’s the only image I repeat, the other street pieces and projects I’ve done are all different. The flower image has come to be what I’m most recognized for. It’s about sharing and spreading smiles. It’s also about discovery; since people begin to notice them throughout the city they’re in or throughout their travels. I was already using the streets for my work in the early 1990’s when I came up with the flower image. I stumbled upon it, really. I was warming up for a painting session by illustrating images of butterflies, kittens and flowers. I had filled a wall with these images and this one single flower was situated in the middle of it all. It just seemed to leap off the surface with its presence. I made a silk screen out of it and soon had printed hundreds in all colors of the rainbow. The next logical thing to me was to paste them all over town and share them with others.” 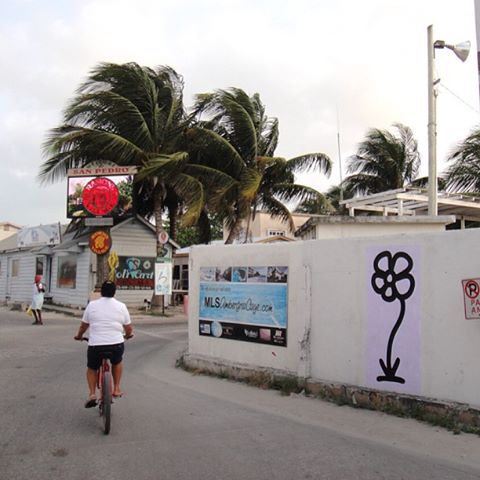 The images in different colors and sizes can be seen on streets all over the globe, including New York, Miami, Los Angeles, San Francisco, Chicago, New Orleans, Seattle, Amsterdam, Paris, Provence, Munich, Barcelona, Catania, Geneva, Hong Kong, Buenos Aires, San Juan Puerto Rico and even on Ambergris Caye. “I believe that street art can provide viewers with magical surprises and wonder throughout their day. It’s about discovery and a reawakening of the senses. I hope that the flowers I ‘plant’ around the world help to spread smiles… When one’s work is on the streets it’s encountered by people of every race, religion, economic status, age, etc. I’m interested in communicating to everyone,” said De Feo.

De Feo was born and raised in the suburbs of New York City, USA. He taught high school art for 15 years and now practices art full time. In 2004 Gingko Press published his children’s book “Alphabet City: Out on the Streets” which employs his street art. According to De Feo, he presently works on additional books amongst other projects. His new paintings were debuted last week in exhibitions at the Brigette Mayer Gallery in Philadelphia and Stolen Space Gallery in London. He is also participating in the “Wooster 10 Year Anniversary” exhibition at Jonathan Levine Gallery this August.